Golfers are glad to be back home 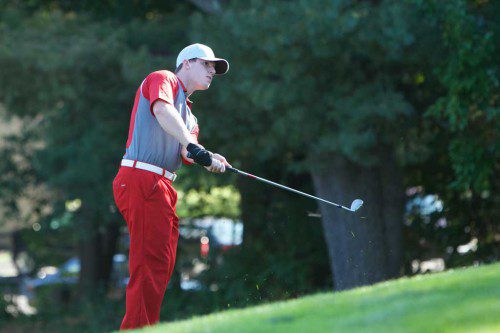 STONEHAM — The Warrior golf team returned home yesterday afternoon and got a much needed win as a result. Wakefield rolled to a 51-21 triumph over Winthrop in a non-league match at the Bear Hill Golf Club.

Wakefield evened its overall record at 4-4 and got a victory after dropping three out of five contests on the road including two in a row.

“A little home cooking is what we needed,” said Coach Dennis Bisso. “Winthrop is usually a much better team. They’re having a bit of a down year. But the win still helps us toward the tournament.”

Wakefield won six of the eight matches and halved the other two.

At number one, junior David Melanson pulled out a 5-4 triumph over the Vikings top golfer. Melanson also shot a 38 which was tied for low score of the day.

Senior co-captain Dylan Melanson also shot a 38 at the third position and posted a 9-0 shutout over his Winthrop foe.

Austin Collard also halved his match, 4.5-4.5, at the fifth position.

At number six, senior Kevin Murray played well and pulled out a 6-3 triumph.

At the eighth spot, Justin Sullivan, a junior, earned an 8-1 triumph as the Warriors swept Winthrop in two matches this fall. Wakefield defeated the Vikings, 48-24, in the first meeting over at the Winthrop Country Club.

In the two alternate matches, senior Stephen Marino won by a 6-3 score at number nine while sophomore John Evangelista dropped a 6-3 contest at 10.

Also the Middlesex League Shootout will be rescheduled after all. The makeup date is now Thursday, Oct. 15 at 7:45 a.m. at Bear Hill.