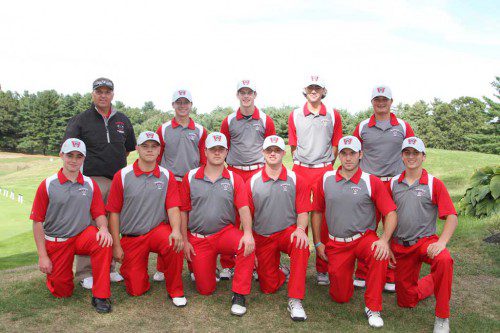 NORTH READING — The Warrior golf team had a much better team score this year at the Div. 2 North Sectional Qualifier and showed quite a bit of improvement. However in an ironic twist of fate, Wakefield placed lower than it did a year ago.

The Warriors posted a terrific score of 327 but came in 10th overall as their season came to end yesterday at the Hillview Country Club in North Reading.

Wakefield scored a 338 last fall and finished sixth overall. But this year the competition proved to much tougher and there were more teams that qualified this year.

North Andover (306 points), Beverly (308) and Malden Catholic (314) were the three teams that have advanced to the state qualifier.

Taking fourth was Concord-Carlisle with 314 points, while Belmont (315) and Danvers (318) secured fifth and sixth place.

Middlesex League rivals Woburn (319), Winchester (320) and Reading (322) finished ahead of the Warriors. Wakefield did however beat out M.L. rivals Burlington (333) and Melrose (338) as the league finished in a pack.

“Wakefield well represented itself,” said Coach Dennis Bisso. “There were more teams this year and the conditions were tough. There was an an hour and half delay due to frost on the greens of the course. Everyone had to deal with the icy conditions, though. The boys played fairly and I’m very happy with the way the kids played.”

Junior Mike Guanci shot a 79 over the 18 holes and just missed qualifying for states as an individual as the cutoff was a score of 77.

Next was junior Tim Hurley who shot an 82.

Two more Warrior seniors played in the postseason match. Kevin Murray shot a 94 while Steven Melanson, a co-captain, carded a score of 97.