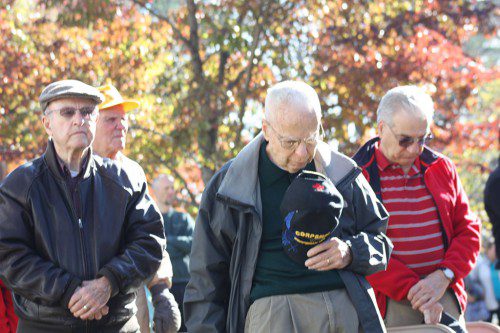 THE SACRIFICES of veterans, both living and dead, were honored by those attending the town’s Veterans’ Day ceremony including (from left) Charles Porter, U.S. Navy Korean War veteran, 1952-56; Paul Anderson, a medical corpsman surgical assistant who served in the U.S. Navy with the Marines during Korean War, 1951-55; and Gene Gangemi, Army Reservist from 1966-72 during Vietnam War. At rear is Ed Purtz, WWII Army Air Corps, 320th Bomb Group, 1942-45.       (Maureen Doherty Photo)

LYNNFIELD —A bright and crisp autumn day greeted an intergenerational crowd of well over 200 people who attended the Veterans’ Day ceremony on the town common to honor the sacrifices of all veterans at precisely 11 o’clock on the 11th day of the 11th month.

Veterans’ Services Officer Jason Kimball, serving as emcee, noted that Veterans’ Day has its origins in WWI, but unlike Memorial Day, which is a day of solemn remembrance for veterans who perished in combat while defending the nation’s freedom, Veterans’ Day is a day of celebration. He dedicated this year’s celebration Mrs. Betty Hayter, a WWII WAVE who passed away in October and who was a fixture at town events honoring veterans.

“We stand here today with sincere gratitude, to honor and remember those who have served to protect these United States of America and our precious freedoms,” Selectmen Chairman Dave Nelson said in his keynote address.

“Americans – we are proud and blessed to live in the greatest country in the world. It is our freedoms that make this so, and those freedoms were won and defended by veterans – the men and women of true valor who put the ideals of our country before themselves,” Nelson said. He added that the nation must remain committed to providing the support veterans need to “make the transition back to civilian life,” especially for those veterans returning home with “physical and psychological scars.”

The town honored two veterans for their service to the nation, 1st. Lt. Charles Leach, United States Marine Corps, who served honorably for four years, and Airman Kathryn Kimball, United States Air Force, who served honorably for six years. Mrs. Kimball is the wife of Veterans’ Services Agent Jason Kimball. Proclamations from the Board of Selectmen were presented to them both by Nelson.

The National Anthem was performed by the combined Lynnfield High School and Middle School bands under the direction of Thomas Westmoreland.

An honorary rifle volley and three gun salute to the dead followed, conducted by an honor guard of six veterans from the Lynnfield chapter of the American Legion Post 131. Taps was then played by high school trumpeters Shreyas Kudrimoti and Nick Colucci.

The American Legion Post is actively seeking new members and is in search of a permanent home, Kimball said, adding they recently recruited two new members who had served in the Global War on Terrorism. Their next meeting is Jan. 22 at the Wakefield Lodge of Elks at 7 p.m.

All in attendance were invited to enjoy a complimentary buffet inside the 1714 Meeting House at the conclusion of the service.