Gridiron sequel proves to be more exciting than the original

Warriors hold off Burlington for 14-13 triumph in rematch 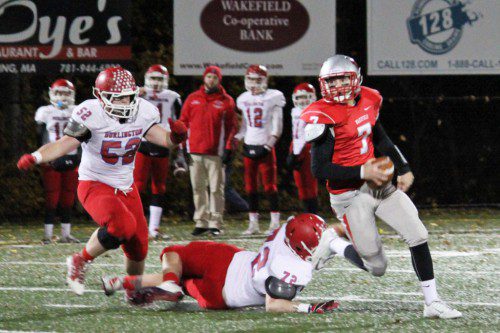 SENIOR QB Anthony Cecere (#7) eludes the tackle of Burlington’s Adam Jankowski (#72) and outruns Brad Basham (#52). Cecere ran for one touchdown and threw for another as the Warriors posted a 14-13 victory over Burlington on Friday night at Landrigan Field.

WAKEFIELD — This time the sequel was even better the original.

On a cold Friday night at Landrigan Field, the fans who braved the elements to see the rematch between the Wakefield Memorial High and Burlington High football teams saw a very entertaining game as the Warriors hung on for a 14-13 triumph over their Middlesex League Freedom division rival in a consolation bracket match-up.

Wakefield jumped out to a 14-0 lead at halftime but the Red Devils came with a touchdown in the third quarter to cut the lead in half. Burlington scored its second TD with 22.7 seconds remaining in the fourth quarter. Instead of kicking the PAT and sending the game into overtime, the Red Devils opted to go for the two-point conversion and the pass fell incomplete as Wakefield earned the win.

Wakefield increased its record to 5-5 on the season while Burlington fell to 2-8 on the year.

The Warriors also swept Burlington in the season series with both games being played at Landrigan Field. On Oct. 24, Wakefield blasted the Red Devils, 35-14. But this victory was much harder to attain for a couple of reasons. One is that Wakefield was without senior RB/LB Luke Martin who is reportedly done for the season. The second is that the Red Devils ran twice as many offensive plays as Wakefield did.

Burlington cut the lead as sophomore QB Dylan Bonfilio found junior fullback Shane O’Halloran with a 26 yard touchdown pass down the middle on a third down and 21 play for the score. Instead of kicking and sending the game into overtime, O’Halloran’s halfback option pass fell incomplete as he was under heavy pressure when he threw the ball.

“I took a time out on the two-point conversion because we knew they were going to try a trick play,” said Boyages. “Fortunately we had the play covered.”

The Red Devils gained 293 yards of total offense (161 passing, 132 rushing) and outgained Wakefield by 110 yards. The Warriors had 107 yards passing and 76 rushing.

Bonfilio completed 14 of 25 passes for 161 yards and two touchdowns. He was intercepted once.

O’Halloran had four catches for 49 yards and one TD, while senior RB Chenet Guerrier had a touchdown reception as well. Guerrier also gained 121 yards on 26 carries to lead the way for Burlington in the run game.

Cecere also rushed for one TD and was Wakefield’s leading rusher with 56 yards on 10 carries.

Defensively, Wakefield bent and gave up yards as it did against Burlington the first time it played the Red Devils. However, the Warriors kept the Red Devils out of the end zone. Burlington also made several miscues as well which aided Wakefield’s cause.

Burlington received the opening kickoff and held the ball for most of the first quarter. Starting at its own 18, the Red Devils sustained a 14 play drive as they got the ball down to the Warrior 20.

Wakefield began its first drive of the game with 2:32 left in the opening quarter. After getting a first down as a result of a pass interference penalty, a two yard loss by Kane and a false start penalty put Wakefield into long yardage. After a Cecere incompletion and eight yard reception by senior TE Dylan Brady, Wakefield punted the ball.

Starting at its own 26, Guerrier had a two yard run for Burlington on the final play of the first quarter. Guerrier had gains of two yards and five yards setting up a fourth down and one from the Red Devil 35. Burlington opted to go for the first down instead of punting and Bonfilio was stopped by junior lineman Logan Dunn for no gain as Wakefield took over at the Red Devil 35.

With the short field, Wakefield needed five plays to get into the end zone. After an incompletion, Calnan had a six yard gain. Brady caught a 10 yard pass for the first down. After a false start penalty and two yard run by Calnan, the Warriors were faced with a second down and 13 play from the Burlington 22. Cecere dropped back to pass and with no one open, tucked the ball down and ran with it. Cecere made a couple of Red Devils miss and cut back over the middle from the left side as he took the ball into the end zone.

Chris Sapanaro added the extra point to put the Warriors in front, 7-0, with 7:23 left in the second quarter.

The Red Devils, starting at their own 34, sustained another long drive, this one being 12 plays long.

Guerrier had runs of 19 yards and minus five yards. After an incompletion, Bonfilio found sophomore WR Mike DeMartinis with a 15 yard pass to bring the ball to the Warrior 37. Guerrier gained three yards, junior WR Jonathan Orchanian caught a five yard pass and Guerrier lost a yard setting up a fourth down and three from the Warrior 30. Orchanian caught a three yard pass for a first down.

O’Halloran had a six yard reception and then ran for three yards. Guerrier lost a yard on third down setting up a fourth down and two play. A false start penalty pushed Burlington back five yards and Bonfilio’s pass intended for DeMartinis was incomplete as Wakefield took over on downs.

The Warriors went into the two-minute drill with 1:54 left in the first half and with the ball at their own 24. Wakefield needed seven plays to get into the end zone.

Sapanaro added his second PAT of the game to give the Warriors at 14-0 lead at halftime.

“We had a couple of key plays,” said Boyages. “We scored late in the first half. On the first touchdown, Cecere is a mobile quarterback and he just made a great athletic move. We made the plays when we had to.”

Wakefield got the ball to start the second half. After runs of two yards by Cecere and three yards by senior RB Pat Casaletto, Cecere’s pass to the right sideline was intercepted on a sensational play by Orchanian who caught the ball and got one foot inbounds for the pick at the Burlington 41.

The Red Devils made Wakefield pay for the mistake as they scored in eight plays.

Bonfilio gained three yards and then found Orchanian with a two yard pass to bring the ball down to the 11. After an incompletion on third down, Bonfilio faded to his right and then threw back to a wide open Guerrier on the left side. The senior RB caught the ball in stride and easily got into the end zone.

Bonfilio added the extra point to cut the Wakefield lead to 13-7 with 4:40 left in the third quarter.

Wakefield picked up one first down on its next drive as Kane caught an 11 yard pass to bring the ball out to the Warrior 49. But Wakefield didn’t pick up the first down even though Brady had an eight yard reception on third down. Any thoughts of possibly going for it on fourth down and one from the Burlington 41, were ended as the Warriors were flagged for an illegal substitution penalty. That resulted in Cecere punting the ball away as Burlington took over its own one yard line.

Guerrier had runs of five, six and two yards to end the third quarter. After a two yard gain by Guerrier and an incompletion, Burlington punted the ball away giving the Warriors great field position as they took over at the Red Devil 46.

Cecere had a four yard run, Kane gained two yards and Beck caught a seven yard pass for a first down at the Burlington 33. After a six yard reception by Kane, the junior RB ripped a long run for an apparent first down. However a holding penalty on Wakefield pushed the ball back to the 37. Cecere was sacked for a yard loss and then was intercepted at the seven yard line by junior DB George Balian who returned the ball seven yards to the 14.

Burlington picked up a pair of first downs, one being on a 13 yard run by Guerrier and the other a 36 yard reception by DeMartinis which brought the ball to the Warrior 39. Bonfilio then lost two yards, had an incompletion and Guerrier gained a yard to set up a fourth down and 11 play from the Wakefield 40. Bonfilio’s fourth down pass was incomplete as Wakefield took over at its own 40 with 3:15 remaining in the game.

“The kids wanted to go for it. Zach Kane slid a bit on the play otherwise we would’ve picked up the first down,” said Boyages.

The Red Devils took advantage of the field position as they took over at the Warrior 48 with 2:14 left in regulation.

Balian caught a 15 yard pass and then Orchanian had a three yard reception. After two incompletions, Bonfilio found Balian down the middle with a 15 yard strike on a fourth down and seven play to keep the drive alive.

Guerrier lost five yards on first down and Bonfilio was sacked by Conroy for a six yard loss setting up a third down and 21 play from the Warrior 26. Bonfilio found O’Halloran open down the middle with a 26-yard TD completion to cut the lead to one with 22.7 seconds remaining.

“Burlington kept converting on third down and long and on fourth down,” said Boyages. “I’m happy we got the win.”

Burlington opted to go for the win but O’Halloran’s pass fell incomplete on the two-point conversion. After Dickey recovered the onside kick and Cecere took a knee, the Warriors had earned their fifth victory of the 2014 season.