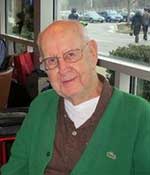 STONEHAM — Harold B. Griffin, 91, passed away at the Lifecare Center of Stoneham on Aug. 26.

Harold was born in Chelsea on Aug. 17, 1925 to the late Harold and Frances (Culliton) Griffin. Mr. Griffin was raised in Malden and graduated from Malden High School. After he graduated from high school, Harold entered the service in 1943 and served his country with pride in the U.S. Navy during World War II and the Korean War. He worked for the Commonwealth of Massachusetts as a bridge repair foreman for over 30 years. Mr. Griffin lived in Medford for 30 years, Malden for several years and the past 15 years in Melrose.

Harold was a member of the Irish American Club in Malden and the Lt. Norman Prince VFW Post no. 1506 in Melrose, where he was involved in the drum and bugle corps and the chorus. Mr. Griffin was also an avid golfer and would play every morning at Hillview Golf Course in North Reading.

He was the beloved husband of the late Ann M. (Sullivan) Griffin and was the loving companion of Helen Duval of Melrose. He was the loving father of Susan M. Tilden and her husband Christopher of Marshfield; John B. Griffin and his wife Mary of Billerica; Joseph B. Griffin of Malden; Karen A. St. Germain and her husband Stephen of Medford, and the late Donald J. Griffin. He is also survived by eight grandchildren, three great-grandchildren, and many nieces and nephews.

Visitation was held at the Gately Funeral Home, 79 West Foster St., Melrose, on Monday, Aug. 29. His funeral was held at the Gately Funeral Home on Tuesday, Aug. 30, followed by a Mass of Christian Burial at Sacred Hearts Church, 297 Main St., Malden. Burial with military honors took place at Holy Cross Cemetery in Malden. In lieu of flowers, memorial contributions may be made in Harold’s name to Care Dimensions Hospice, 75 Sylvan St., Suite B-102, Danvers MA 01923 or at www.caredimensions.org. To send a message of condolence, visit www.gatelyfh.com.