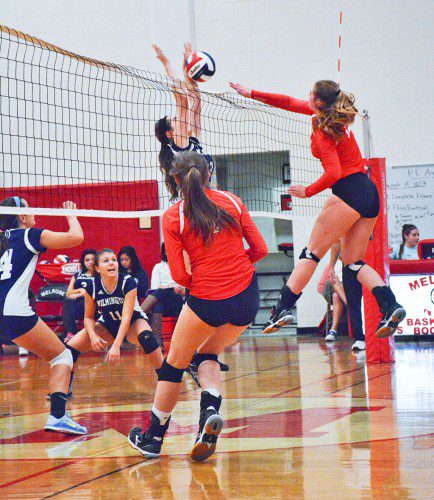 VICTORIA CROVO is leading the Melrose Lady Raider volleyball team in kills this season, ranked 7th in the division. Melrose remains unbeaten in the Middlesex League at 12-0. (Steve Karampalas photo)

MELROSE—As their regular season draws closer to a close, the Melrose Lady Raider volleyball team has surprised no one by showing total dominance in the Middlesex League, currently undefeated at 12-0 after four consecutive league wins over Wilmington, Winchester, Woburn and Reading. Melrose has overwhelmed local competition sweeping all but one of their 12 sets during the week, making it a foregone conclusion of another league title, but with a cautious eye on Div. 2 playoff run.

The only blip on the radar throughout this season has been two losses to outside competition, including two of the best teams in the state, Notre Dame of Hingham and Central Catholic, which makes Melrose’s overall record 12-2. But Melrose coach Scott Celli knows that in order to be the best, you need to play with the best. That’s why Melrose looks forward to a marquee matchup against Arlington Catholic tonight at 6:00 p.m. at the Melrose Middle School gym. The Lady Raiders have a long history with the Cougars, with Melrose taking the last two games , but the Cougars bring to the court one of the best hitters in the state, Demi Fogarty, who is sure to keep Melrose’s defense on their toes.

Still, enjoying a four game winning streak gives the Lady Raiders an extra oomph as they close out their regular season. On Monday, Melrose made mincemeat of Wilmington in sets of 25-15, 25-15, 25-13. Though they faced an admirable challenger in Wildcat middle hitter Erika Pudvellis, a formidable front row blocker, Wilmington defense had no answers for the powerful hitting of Melrose’s Marisa Cataldo (13 kills), Victoria Crovo (9 kills) and Hannah Mulcahey (8 kills). Nor could they answer to Melrose’s strong serving behind the efforts of Jill Mercer (who carried Melrose to an 8-3 lead in set one) Saoirse Connolly and Lily Fitzgerald, who leads the team in serving this season. In recent games Fitzgerald has assumed role as setter and, to date, has tallied 227 assists, putting her within the top 15 setters in Div. 2.

Offensively, Melrose continues to put up fine numbers with junior captain Victoria Crovo leading with 134 kills thus far this season, senior captain Marissa Cataldo with 102 and senior Hannah Mulcahey 87. Just a junior, Crovo in particular will be counted on in post season as she is ranked 7th in the division in kills.

And while the Middlesex League can’t seem to come up with answers for Melrose volleyball, division and statewide competition are another beast. Division 2 is looking particularly tough this season, with Arlington Catholic, Notre Dame of Hingham, Canton and Hopkinton all showing teeth. Melrose will face the likes of this competition when playoffs begin sometime around November 5.

In the meantime, Melrose will be prepared for Arlington Catholic, a familiar team to Melrose, who edged the Cougars 3-2 last fall. Should they be able to contain the powerful hitting of Fogarty, they should be in good shape to take a win. Action takes place at the Melrose Middle School gym at 6:00 p.m.

Melrose’s final regular season home game is against Stoneham on October 23. The team will celebrate their Senior Night that evening. Melrose wraps up the season on the road against formidable opponents Newton North, Ursuline Academy and Westborough.