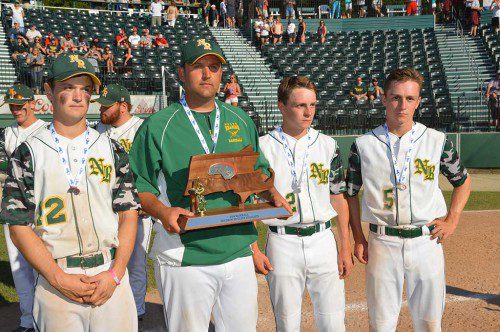 WORCESTER — It was a heartbreaking day for the North Reading High baseball team last Saturday afternoon as they were facing Groton-Dunstable for the Division 3 state title at Holy Cross in Worcester.

An edge–of–your–seat, seventh inning comeback came up just short as the Hornets fell, 5–4, to the Crusaders on a warm, sunny day at Fitton Field.

With the defeat, the North champion Hornets ended the year at 22–4 while Central champion Groton–Dunstable ran the table finishing 23–0.

Things started off well for the locals as they raced out to a 3–0 lead.

Groton–Dunstable may have won the game and finished undefeated, but the Hornets gave them their toughest game of the year. G–D coach Matt LeBlanc said this was the first time the Crusaders were down by three runs all year.

However, the wheels came off in the bottom of the fifth as the Crusaders scored four times to take the lead for good.

“We had two errors and hit two batters,” pointed out Hornets manager Eric Archambault. “That was very unlike the way we have played all season.”

With one out, Hornets starting pitcher Greg Johnson hit back–to–back hitters. Chris Latti reached on an error to load the bases. Jacob Barnes then singled to right to scored two runs. The Crusaders tied it when a pick–off throw at second went into center field allowing the runner from third to score. Joe Simeone then doubled to left–center to plate another run and make it 4–3.

Groton–Dunstable then scored one more run in the sixth to increase the lead to two as Aidan Ward doubled and scored on a throwing error after he stole third base.

North Reading did not go quietly and scratched and clawed until their final out. The Hornets had runners at second and third with one out in the seventh. Tyler Calos then had a sacrifice fly to center off Simeone (pitching in relief) to cut the lead to one.

Everyone in the stadium, including the Groton–Dunstable fans, thought North Reading tied the score when senior Mike Driscoll, who was on third, attempted to take home after catching the Crusaders out of position with nobody covering the plate. However, a small controversy ensued as the umpire ruled that time was called and sent Driscoll back to third.

Pat Driscoll (2 for 3) was hit by a pitch and Jared Valade walked to load the bases. Bob Donohue (2 for 4) then hit a grounder up the middle but Lattini made a diving stop and stepped on second to end the game.

Johnson was the losing pitcher lasting five innings to finish at 6–2 this spring. He gave up five runs (none earned), six hits, no walks and he struck out three.

Simeone recorded the save.

“I told the team that I couldn’t have been more proud of them,” said Archambault. “This was a great season even though we are disappointed how it ended.”

In the state semi–final game last Wednesday, the Hornets shut out East Bridgewater, 6–0, at Fraser Field in Lynn. Mike McCauley was the story in this game as the junior pitcher spun a complete game shutout.

“He did an incredible job in this game,” stated Archambault. “He had an outstanding year for us.”

McCauley went to 10–1 on the hill allowing four hits, two walks and he fanned five.

The Hornet offense had nine hits led by Merullo who was 2 for 3. Donohue went 1 for 1 with an RBI single while Mejia knocked in two runs with a sacrifice fly and a fielder’s choice. DiVecchia also had a sacrifice fly.

The Hornets scored five times in the bottom of the second and once more in the fifth to round out the scoring.