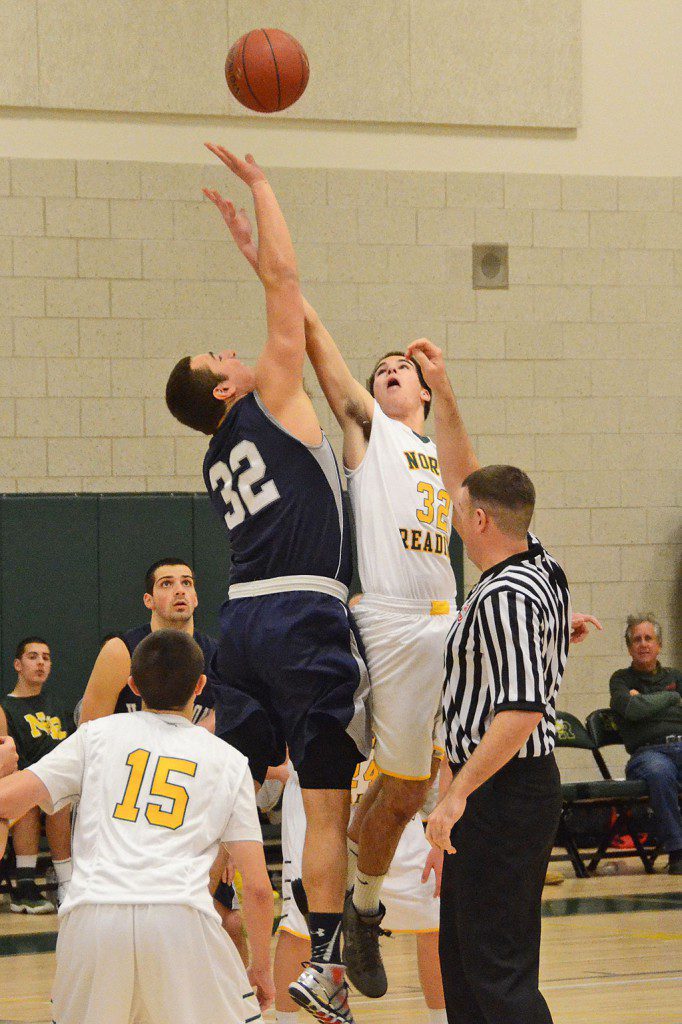 NORTH READING — The Hornets’ furious comeback fell short as they suffered a 66-65 defeat on the basketball court to the Greater Lawrence Tech Reggies in the first round of the Kipnes Holiday Tournament on December 27. Senior Derek Hogan was superb with 31 points, including five 3-pointers.

North Reading stumbled out of the gate. Early foul trouble stagnated the offense and they were down by as much as 15 in the first quarter. They fought hard but the Reggies were up 19-11 after one.

The Hornets tried to crawl back into the game in the second quarter. Their 2-2-1 full court defense really slowed down Greater Lawrence. Aided by three 3’s, North Reading scored 20 points but still found themselves down seven, 38-31, at the half.

The third was a battle. Tenacious defense caused eight turnovers and held the Reggies to just eight points in the quarter. The Hornets headed to the fourth only down by four.

Hogan was terrific in the fourth quarter and almost single handily kept North Reading alive with 13 points, including three 3-pointers. It was a back and forth affair and at one point the game was tied. Unfortunately, the Hornets couldn’t knock down a hoop in the final 10 seconds and lost their second game of the season by one point.

The Hornets beat the Winthrop Vikings 59-38 in the Kipnes Tournament consolation game on December 28. Juniors Adam Goldstein and Kevin Dorosh both had a game-high 17 points. Goldstein was also named to the All-Tournament team.

North Reading jumped out to a quick 8-0 lead just three minutes into the game thanks to 3-pointers from Dorosh and Goldstein. The Hornets took a 13-7 lead after one.

The offense caught fire in the second quarter. Goldstein had a huge quarter inside, providing the Green and Gold with seven points. Senior guards Peter Walsh and Derek Hogan each added a three to give North Reading a 32-18 lead at the half.

The Hornets put the game out of reach in the third. The Vikings had no answer for their pressure defense. Dorosh sparked the offense with 10 points in the quarter and the lead ballooned to 51-24. North Reading went on to win easily, 59-38.

The Hornets followed up their win over Winthrop by demolishing the Notre Dame-Cristo Rey Hurricanes 74-41 on December 30. Junior guard Billy Brandano and Kevin Dorosh were leading scorers with 14 points each.

North Reading came out sluggish in the opening quarter and only led 19-14 after one. But they put the game away in the second quarter. Once again Dorosh sparked the offense with 11 points in the quarter and they headed into the half up 37-19. The Hornets were never threatened in the second half and won easily 74-41.

After finishing their five-game homestand 3-2, the boys’ basketball ball team is now 3-3 overall.

They traveled to Masconomet Saturday and Pentucket on Tuesday, both after press time. On Friday night, they’ll host the Manchester-Essex Hornets at 7 p.m. followed by the Georgetown Royals on Tuesday, Jan. 13 at 7 p.m.