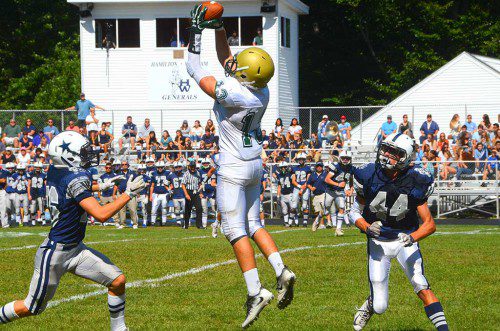 SOUTH HAMILTON — From the very first play, it was obvious this was going to be a special game.

The North Reading football Hornets were victorious for the second straight contest in the young season, as they beat the Hamilton–Wenham Generals 21–12 last Saturday afternoon at the Generals’ home field in South Hamilton. This win marks the third in a row for the Hornets over the Generals, which is great considering how Hamilton–Wenham dominated the series over the prior 20 years.

The Hornets defense started off with a bang on the very first play from scrimmage, as defensive lineman Michael Quaratiello picked up a Hamilton–Wenham fumble and took it 52 yards to the end zone. Senior captain Bobby O’Donnell kicked the extra point to give the Green and Gold a 7 – 0 lead only one play into the game.

It did not take the Generals long to answer. They did so only few plays after they got the ball back, with a strike from junior quarterback Billy Whelan, who threw to an open Sam Peach who completed the 65-yard touchdown run. The extra point was no good, so the Hornets still had a slim led at 7 – 6.

The way the game started, it appeared that it was going to be a shootout but both teams struggled to put points on the scoreboard for the rest of the first half. The Green and Gold had chances for points on their final two offensive drives of the first half, getting past the General 20 yard line but could not convert on fourth down to keep the drive alive.

Some of the North Reading problems in the first could have been that the players are still trying to learn the pistol formation playbook new to the team this season according to Hornet Head Coach Jeff Wall.

“The first half was more about execution. We struggled to execute and fire on all cylinders,” said Wall. “Talking to them at halftime was more about ramping them down actually and have them think clearly. We have a very talented team but we haven’t put it together quite yet, though.”

It wasn’t until late in the third quarter that the Green and Gold could increase their lead as the offense gained confidence as the second half went on, including junior quarterback Kyle Bythrow and senior captain and running back Matt McCarthy who would be key in a five play 47–yard drive that concluded with McCarthy crossing the goal line from a yard out, set up by a great 19-yard run by Bythrow. The O’Donnell extra point was made, given North Reading a 14 – 6 lead.

The Hornets would increase their lead to 21– 6 thanks to McCarthy again from a yard out but this time on a crucial fourth down and O’Donnell made the point after.

The Generals would get one more score before the afternoon ended as the Whelan hit some big passes that would set up this touchdown from the 1 yard line but the extra point went wide again leaving the Generals down by two possessions.

Despite the late touchdown by Hamilton–Wenham, the Hornets defense was rock steady for most of the afternoon especially in the second half where they got key contributions from players like lineman Bob O’Donnell, senior captain John Merullo and junior linebacker Ryan Edison, who made a tremendous hit on the Generals’ quarterback that could have been felt in the stands.

The Generals went for an onside kick at the end but the Green and Gold quickly recovered and then just knelt on the ball to complete the victory.

The Hornets are now 2–0 in their overall record and in the Cape Ann League. They hope to continue their winning streak at home, Friday night against the Somerville Highlanders, whom they beat last season 34-13, behind a four touchdown performance from McCarthy.