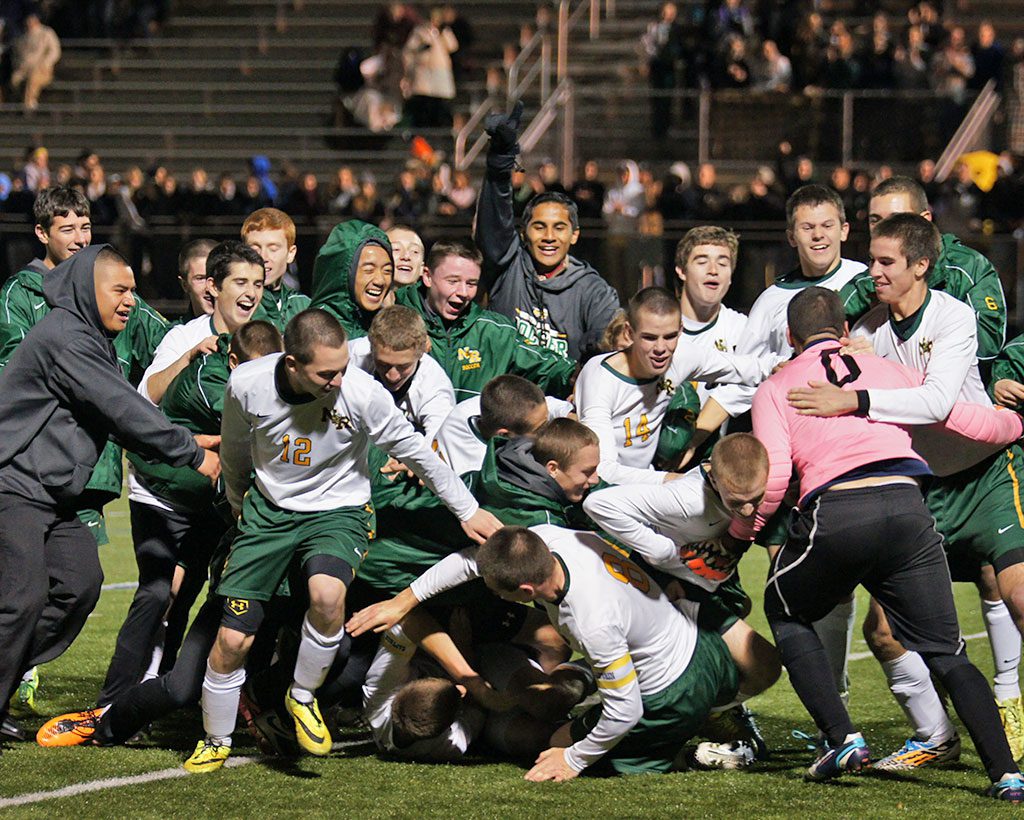 THE JUBILANT Hornet soccer team celebrates after defeating Wilmington in the semi finals to advance to the Division 3 North final. (John Intorcio Photo)

LYNN — Junior goalkeeper Billy Brandano made two crucial saves in a shootout to help the Hornets boys’ soccer team down the Wilmington Wildcats 2-1 on penalty kicks in the Division 3 North semifinals on Nov. 12. It marked the first time North Reading had advanced to the North Final since 1993.

Senior captain Alex Brown got the Hornets on the board less than five minutes into the game. Senior captain Dan Coveney took the ball down the right side of the field and sent a perfect cross to the far post where Brown tapped the ball into the open net. For the remainder of the half the field was tilted toward the North Reading offense. But the Wildcats goalie made a couple of saves and the Hornets sent some chances wide. The score remained 1-0 at the half.

For the final 25 minutes Wilmington took control offensively. The North Reading defense hung tough and it looked like they would escape with the win. Unfortunately, in the 78th minute, the Wildcats scored on a perfectly placed free kick to the top corner of the net from 30 yards. The game headed to overtime tied at 1-1.

After two scoreless 10 minute overtime periods the game headed to a shootout. The Hornets shot first and senior captain Adam Sapp calmly scored. Brandano came up with a huge save and it was 1-0 after round one.

After senior Zach Herman missed to start round two Brandano picked him up with a save to preserve the lead. After both teams made their next two kicks the game fell into the hands of senior captain Greg Landry. Landry scored easily, was mobbed by his teammates and the Hornets took the shootout 4-2.

The Hornets’ magical season was ended by the Wayland Warriors with their 3-1 victory in the Division 3 North Final at Manning Field on Sunday night. Zach Herman scored for North Reading.

Wayland had the first scoring chance a little over three minutes into the game. The Warriors’ initial shot was saved but it resulted in a tough rebound that was sent wide of the open cage. They had another chance to take the lead in the 24th minute but were thwarted by the crossbar. Fortunately in the 35th minute Adam Sapp found Herman whose shot deflected into the net for the 1-0 lead and that’s where the game remained at the half.

Less than one minute into the second half North Reading had a chance to extend the lead when the Warriors’ goalie dropped the rebound, but it was headed wide. This would come back to haunt the Hornets. In the 53rd minute Wayland’s senior captain, Andrea Pascual-Leone, broke into the box and beat Brandano to the far post to tie it up. In the 62nd minute North Reading tried to answer but was denied by the post.

Just over seven minutes later the Warriors once again punished the Hornets for their missed opportunity. Sophomore Alec Foster took a free kick and served the ball to sophomore Jackson Fletcher who had a free header to give Wayland the lead. The Wayland defense stymied the Hornets the rest of the way and added a late goal to seal the 3-1 win.

Despite the loss Coach Mark Bisognano was proud of his team. “You guys had a great season. The difference between winning and losing in the state tournament is razor thin and we had some breaks go against us, but we should hold our heads high and be proud of what we accomplished,” he said.

“This senior class has set a high standard, not only in terms of number of wins or tournament success, but in the way that they played the game. We played the ‘beautiful game’ in an attractive way at a high technical and tactical level. That will be the lasting mark of the 2014 NRHS soccer team.” Bisognano believes.

After receiving a bye in the first round of the Div. 3 North tournament series, the No. 1 seeded Hornets finished the season with a 2-1 tournament run for an overall season record of 14-4-3.