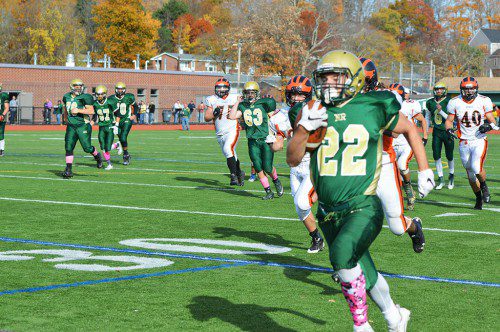 SENIOR DAVID SMITH left the Ipswich defense far behind as he reeled off this long run in the third quarter to set up North Reading’s final score, making it 41–0. (Bob Turosz Photo)

NORTH READING —This year’s Halloween for the North Reading High School football team was anything but scary – it was exhilarating. In their first playoff appearance of the 21st century, the Green and Gold eliminated the Ipswich Tigers from the M.I.A.A. Division 4 North Playoffs, defeating them at the Arthur Kenney Field, 41–3 last Saturday afternoon.

The Hornets were probably more motivated than usual since the Boston Globe staff writer Bob Holmes predicted the Tigers would beat North Reading, based on Ipswich’s fourth quarter performance when the last two teams met on Sept. 11. In that game, the Hornets built up a 28-0 lead in the first three periods of the game but gave up 14 points in the fourth quarter, when Coach Jeff Wall was resting most of the starters. It was the first game of the year and most of the Hornet players in the game at that point had seen little or no action in the young season. Coach Wall made sure his players saw the prediction.

“We showed it to them yesterday, (Friday) and I think it made some of the kids a little bit angry,” said Wall. “The fact that we didn’t have our starters in the fourth quarter, it was great. I love bulletin board material. I hope (Holmes) has something for the next team we take on.”

The Hornets won the toss and went with the “Patriot way” by electing to kick off first and receive the ball first in the second half. The Green and Gold defense held strong on the Tigers’ first drive, forcing them punt after four plays, setting up a punt return that would result in a 51 yard return touchdown by junior Matt McCarthy. Senior Angelo Disanto tacked on the extra point to give the Hornets an early 7-0 lead.

McCarthy struck again at the beginning of the second quarter, this time on the conventional 5 yard run into the end zone with another Disanto extra point giving North Reading a 14-0 lead.

The score went to 21-0 when Hornet junior running back David Smith found the end zone with a 19 yard run, plus the point after touchdown by Disanto. The contest was turning into the same type of game as on Sept. 11, with North Reading dominating. To quote the recently deceased New York Yankee great Yogi Berra, it was “it was déjà vu all over again.”

With just 26 seconds left in the first half, North Reading finished its scoring in the half with a TD from an unusual candidate. Senior captain Nic O’Connell, who is primarily a defense/offensive lineman, lined up behind quarterback Nick Colangelo instead of in front of him and took the ball from 2 yards out for the first offensive touchdown of his career. The touchdown by O’Connell was a well deserved acknowledgment from the Hornet coaching staff for O’Connell’s hard work and dedication as well for his leadership, as he has the rare distinction as being a two-year captain. Disanto missed the extra-point and the Green and Gold was only up 27-0 at the half.

The Hornets the pulled the double whammy, as they scored on the first possession of the second half, scoring on the second play of the half, when McCarthy found the end zone again, going 51 yards this time for his third touchdown of the day. Disanto kicked the extra-point through the uprights and it was now a 34 point lead.

McCarthy was outstanding again, rushing for 155 on just 15 carries, giving him an average of 10 yards per carry. With the three touchdowns, he has 19 touchdowns this season overall, six against Ipswich alone and leads all scorers in Division 4 with 114 points.

North Reading is primarily a running team thanks to runners like McCarthy and Smith so senior quarterback Nick Colangelo rarely has to show off his arm but he got do just that on a 9 yard pass to junior tight end Bob Donohue in the end zone. For both of them, it was their first touchdown of the year and with another the point after touchdown by Disanto, gave the Green and Gold the last points of the game.

Like the first time these two teams met, the North Reading reserves saw playing time but, unlike last time, they kept the Tigers out of the end zone. Ipswich could only muster a late fourth quarter field goal.

North Reading is now on to the semi-finals of M.I.A.A. Division 4 North Playoffs against the 5–3 Watertown Raiders, who upset the Lynnfield Pioneers last Friday night in Lynnfield, 25-17. This is the first time these two have met since 2008, when the Hornets defeated the Raiders 21-0. Like last time, the game will be on the Arthur Kenney Athletic Field. Coach Wall is not taking the Raiders lightly.

“They are a very talented team,” said Wall. “They’re quick and they’re scrappy. We are going to have to be on top of our games if we want to compete with them.”

Kickoff is tomorrow night at 7 p.m. If the Hornets win, they will advance to take on the winner to the Bedford–Stoneham game in the next round of the playoffs.