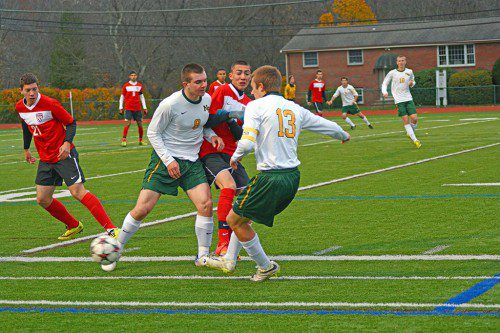 Early on in the first half North Reading suffered a significant injury. In the 10th minute, the team’s leading goal scorer, senior Jake Intorcio, went down with a season-ending broken collarbone. Coach Mark Bisognano commented on Intorcio’s injury after the game. “We definitely missed him in the game. It was nice to get the win for him and to have him back from the hospital in time to join in the post-game celebration,” he said.

The rest of the opening half was an even and chippy affair with both teams trading chances. The Raiders had two early opportunities, but sent one wide and the other was saved by sophomore Billy Brandano.

In the 34th minute the Hornets almost got on the board when a high shot from about 30 yards out got caught in the wind and almost floated over the goalie. The game would remain at 0-0 at the half.

The North Reading offense had two golden opportunities at the start of the second half. In the 43rd minute Coveney ripped a shot from just inside the box that missed the net by inches. Just over four minutes later Coveney hit a free kick perfectly but the ball clanked off the post and rolled out.

With a little over 10 minutes remaining Watertown nearly broke the deadlock. The Raiders struck a free kick from 40 yards that Brandano only got a fingertip on that deflected off the underside of the crossbar and somehow stayed out. That was the last chance for a goal in regulation and the game went on to overtime.

Overtime would turn out to be short-lived. The Hornets immediately pressured the Watertown goalie and were awarded a corner less than two minutes into the extra frame. Junior Nick Govostes hit a hard low ball that two North Reading players let roll to Coveney who blasted the winner into the net.

Commenting on the final play, Bisognano said, “It’s nice when you win a game on something that comes straight from the practice field. It reinforces why we do all the work that we do on a daily basis. That particular corner kick play is a play that we’ve run off and on for about 20 years in this program, but I don’t think we’ve ever run it that effectively when you consider the situation.”

He went on to say, “Dan Coveney is the perfect person to run that play with. He always strikes the ball cleanly and he is usually very accurate. He couldn’t have hit that shot any cleaner and the placement was perfect.”

On to Div. 3 North semifinals

The victory improved North Reading’s record to 14-3-3 and guaranteed the Hornets a slot in the Div. 3 North semifinals. The game was played against Wilmington on Wednesday night at Manning Field in Lynn, a neutral site, after the Transcript went to press.

The victorious team will play for the Div. 3 North championship title on Sunday, Nov. 16 at 6:30 p.m., also at Manning Field. The opponent will be the winner of the semifinal game played between Tewksbury and Wayland prior to the Hornets vs. Wildcats matchup.

The Div. 3 North Championship team will compete in the Div. 3 state semifinals early next week, with the state title match slated for the weekend of Nov. 22-23. Bracket updates will be posted on www.miaa.net.