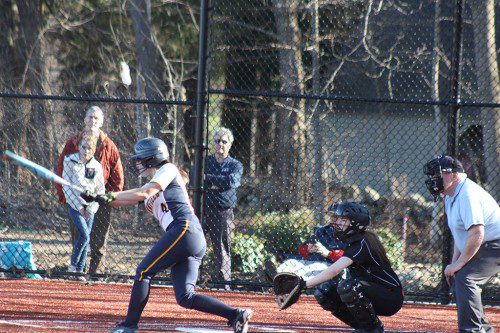 LYNNFIELD — The softball team was on fire over vacation week. The team’s 3-0 week was fueled by a combined 38 runs scored while giving up just nine.

At 6-1 overall, the Pioneers currently sit atop the standings among small schools in the CAL Baker Division.

The week opened up with a 14-2 victory over East Boston last Monday followed by a 12-5 win over Manchester-Essex last Wednesday and a 12-2 win over Georgetown last Friday.

Senior pitcher Sadie Oliver is credited with two out of these three wins, as she threw against both East Boston and Georgetown. Oliver struck out five East Boston batters and gave up just two hits on Monday. She also pitched well against the Royals on Friday, pitching a complete game with nine strikeouts while giving up five hits.

The winning pitcher in the mid-week game against Manchester-Essex was freshman Olivia Keane, who also picked up her second victory of the season. She now has a personal record of 2-1.

Assistant captain Annika Han also has a record of 2-0 on the mound thus far.

Varsity softball coach Peter Marinelli is pleased by the performance and depth of his pitching staff to date. He has a lot of options between Oliver, Keane and Han and considers it fortunate that the team is not dependent upon one pitcher.

“That’s one of our objectives every year. We want to have a pitching staff, not just one pitcher. I’ve been coaching a long, long time and there have been times when if I have one pitcher I’m lucky. But I feel very fortunate that we have a number of kids that we can pitch,” Marinelli said.

In fast pitch softball, Marinelli said, “situations can change very quickly. You just never know because if you have to relieve somebody on a particular day because they’re not pitching very well it might throw the rotation off.”

He added, “I even have another girl on the team where if we need her to pitch she can throw and we also have a pitcher on the JV team who I know is going to be pretty good.”

Playing an early morning game on Marathon Monday, the Pioneers beat the afternoon rain and leave the field with a satisfying 14-2 win.

Lead-off hitter and team captain Hannah Travers went 3 for 4 to fuel the team’s offensive output. “She had a triple and a double and a single,” Marinelli said.

“Also on that particular day, Leigh Guerra went 3 for 4, so she was the other player who got a lot of hits that game,” he said, adding, “And we played good defense that day.”

Against the Manchester-Essex Hornets on Wednesday, Keane threw seven strikeouts and gave up eight hits.

She was supported by good fielding while the Pioneers gained the advantage over the Hornets with aggressive base running.

“That was one of those games where we didn’t hit that well. We only had seven hits that day, but we also had a number of girls who got walks and the thing that really made a big difference for us is we ran the bases extremely well,” said Marinelli. “We were very aggressive. We got them to throw the ball around and we took advantage of every little thing that we could.”

He explained in fast pitch softball “there are times when you are not going to hit the ball that well so you have to learn to to manufacture runs.”

The Pioneers did just that and as a result, he said they drove their opponents “crazy when we were on the bases.”

Marinelli characterized Friday’s 12-2 win over Georgetown as “the most solid game that we’ve played all year.”

“We hit the ball, we played very good defense, we pitched well, and when we hit, we hit with production. So it was a good, solid overall game,” he said.

Travers, the team’s first baseman, struck gold with her second home run of the season against Georgetown while Han patrolled the outfield and also went 4 for 4 at the plate, scoring three times.

“Today we had more than a couple of kids playing excellent defense, but two really stood out,” Marinelli said. “Senior Maddie Klug played excellent shortstop today plus she had two hits and (sophomore) Kelly Dillon played very well at third base today and she had two hits.”

Smart base running proved crucial against Georgetown as well. While he says there is “no doubt” the team has a lot of speedy runners, it is not just the fastest runners who cross the plate.

“I keep telling my kids that you don’t have to be the fastest runner in order to be a good base runner. One of my slower runners is my catcher, but she tagged up and went from second to third on a foul pop up down the right field line. When you do things like that it does make a big difference,” he said.

The catcher was assistant captain Kelly Hosterman and her coach said she stole that base successfully because she was paying attention to the behavior of her opponent after the pop fly was caught.

Marinelli recalled that Hosterman “came off the base, was looking and then she took off because she had opening. That is something we’ve been stressing this year. We want to take extra bases whenever we can because it will make a difference. Instead of Kelly being at second base, she was at third base and it was easy enough for her to score on the next hit whereas she might not have been able to score from second base.”

All in all the team’s sixth win of the season was “a good overall effort,” he said. That experience should serve the Pioneers well as they face five large school division teams over the next two weeks.

“As I told the kids, the games are going to get tougher as we go along so we got to make sure that we’re taking care of what we are capable of doing. We can’t give away things; we can’t make errors, we can’t give the other team extra bases on plays,” Marinelli said. “If we play solid, we can compete with these teams. Now, will we win them? I don’t know, but as long as we’re in the game and we’re competitive, we have a chance.”

On Monday, Lynnfield played against Pentucket at home (after press time) and is slated to take on Triton today (April 29) at home at 3:45 p.m. On Friday, the Masconomet Chieftains come to town for another 3:45 p.m. start at the new softball complex.

The team travels to East Boston next Monday for a non-league game and followed by an away game at Hamilton-Wenham next Tuesday before returning home to host large school rival North Reading next Wednesday. All the games start at 3:45 p.m.