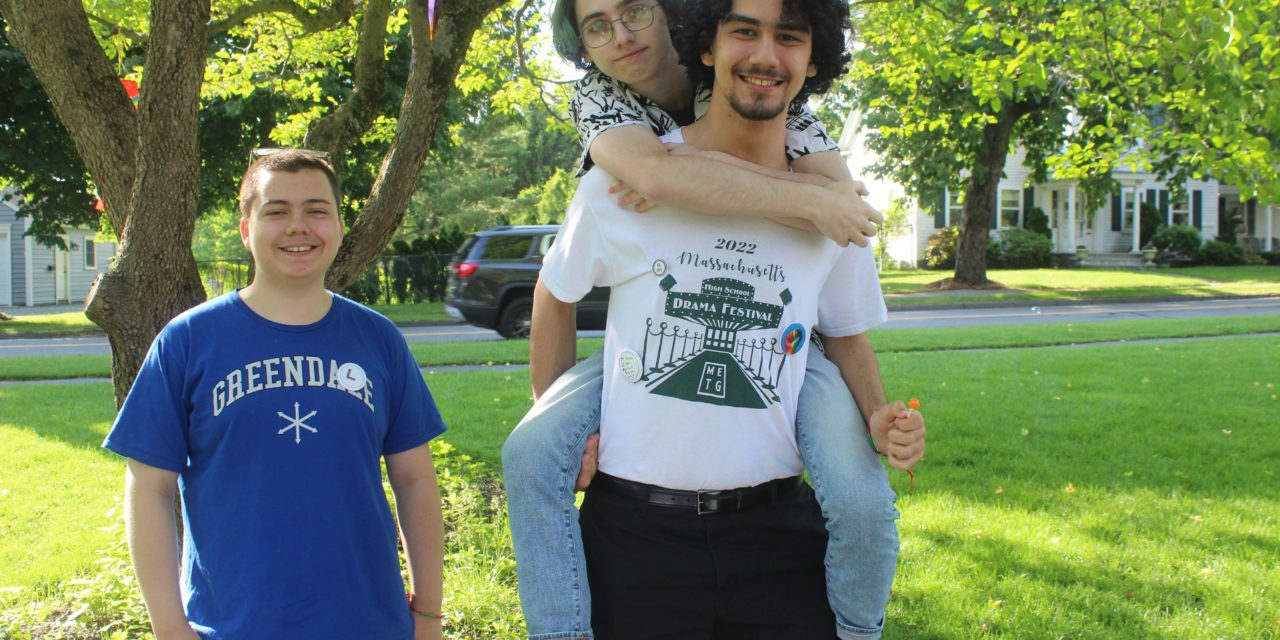 That message rang loud and clear during the first annual Lynnfield Pride Celebration held on the Town Common on June 4. Lynnfield for Love organized the event along with the Lynnfield High School and Lynnfield Middle School GSAs to celebrate the LGBTQ+ community in town and beyond. Three hundred residents attended the celebration.

The celebration included arts, crafts, education stations, face painting and a variety of vendors. The Progressive Pride Flag was also raised on a flagpole placed next to the Town Common stage.

The Lynnfield Pride Celebration also included raffle prizes, the proceeds of which were donated to the North Shore Alliance of GLBTQ Youth (NAGLY). Superintendent Kristen Vogel and the Administrative Leadership Team also attended the celebration to show their support for the town’s LGBTQ+ community, especially Lynnfield students.

The ceremony began with the 300 attendees holding a moment of silence in memory of the thousands of members of the LGBTQ+ community who died from AIDS and senseless violence. The ceremony’s attendees also commemorated the Stonewall Riots that took place in New York City in 1969.

Select Board member Dick Dalton thanked Lynnfield for Love and the two GSAs for organizing the Lynnfield Pride Celebration.

“Lynnfield for Love holds different community events to raise awareness about different issues, and they play a very important role in the community,” said Dalton. “I also want to thank the GSA students at Lynnfield High School and Lynnfield Middle School for helping put this event on today.”

Dalton also read a proclamation from the Select Board declaring June as Pride Month.

“The town of Lynnfield recognizes and proclaims the month of June 2022 as Lesbian, Gay, Bisexual, Transgender and Queer (LGBTQ) Pride Month throughout the town,” said Dalton. “All human beings are born free and equal in dignity and rights. LGBTQ+ individuals have had immeasurable impact to the cultural, civic and economic successes of our country. The town of Lynnfield is committed to supporting visibility, dignity and equality for LGBTQ+ people in our community. The need for education and awareness remains vital to end discrimination and prejudice. This nation was founded on the principle that every individual has infinite dignity and worth, and the Select Board calls upon the people of Lynnfield to embrace this principle and work to eliminate prejudice everywhere it exists.”

LHS Class of 2013 graduate Cameron Russo recalled how he came out as transgender 13 years ago.

“I graduated from Lynnfield Middle School and Lynnfield High School,” said Russo. “I always felt different growing up, but I couldn’t quite understand why. I came out as transgender to my mom in 2009, and I started transitioning right after I graduated from high school. Feeling that sense of relief was the best thing I have ever felt in my life.”

Russo launched a YouTube channel to document his experience.

“I reached a good amount of people,” said Russo. “Awareness is very, very important. It’s a necessity within the LGBTQ community to be open, transparent and be your true self. This is why Pride Month is so important. It strives for universal equality and spreads love. We are all born in the same world, and deserve the same opportunities. We are all human.”

Russo said he was denied financial aid because he is transgender.

“I fought it,” said Russo. “I went to the governor and got the money because we have to fight for our rights. I take pride in who I am and I am not ashamed of myself. When I look in the mirror now, I feel at peace.”

After Russo concluded his remarks, he was given a round of applause.

Rottman said, “Being an ally and a friend matters.”

“It’s not something you can celebrate one day and be quiet about the next,” said Rottman. “While it’s wonderful that all of you are here today, it is even more vital that when you witness someone being bullied and harassed, you stand with them in the way they find most helpful. Make what we celebrate today what you defend tomorrow.”

Rottman said it takes only three seconds to let an LGBTQ+ person know they are welcome to a church.

“That is why we have done the work to become an open and affirming congregation,” said Rottman. “That is why the Rainbow stripe is on the side of the church and the Progressive Pride Flag hangs by the front doors. Without it, we wouldn’t have been able to welcome so many amazing people.”

In closing, Rottman urged the Lynnfield Pride Celebration’s attendees to be compassionate and supportive of the LGBTQ+ community.

“Your Rainbow Pioneer pin isn’t just for one week of the year,” said Rottman. “It’s for all the time.”

After Rottman concluded her remarks, she was given a round of applause.

Arlington Street resident Beverly Ballaro recalled that she, her wife and their son met with a state lawmaker during the fight for marriage equality in Massachusetts in the early 2000s.

“We wanted to speak with him personally and tell him why it was important for marriage to become legal so we could gain access to health care and other things,” said Ballaro. “After we made our argument, he looked at us in the eye and said, ‘You know, there are many people who wish you just didn’t exist.’ He was right. That is why it is so critical to have allies, gatherings and visibility like this. We can counter that mindset through kindness, compassion, decency and family. It was not long after that meeting that we were able to walk into that same Town Hall and get our marriage license. It’s important.”

Ballaro acknowledged that it’s easy for members of LGBTQ+ community and allies to become “discouraged.”

“We live in difficult times,” said Ballaro. “We live in a culture right now where we have people who are not terribly motivated to do anything about the fact that people can walk into classrooms with weapons used on the battlefield, but those same people are extremely worried about trans kids running on the track team. We have the ‘Don’t Say Gay’ bill that just passed in Florida. There are a rash of bills in legislatures across the country that seek to do things such as criminalize gender-affirming health care. These are difficult and dark times. However, I have hope when I look out and see all of these friends, allies, supporters and all of these wonderful young people. Keep the visibility and allyship going.”

After Ballaro concluded her remarks, she was given a round of applause.

Helen Tieger recalled that her mother did not speak to her for a number of years after she came out 40 years ago.

“She is 90-years-old now, and is one of my closest friends,” said Tieger. “She has done a huge amount of growing in order to love me and love the community. We get to enjoy a lot of freedom right now, but it’s not guaranteed. Things could change if we don’t continue to be avid advocates for ourselves and our friends. That would be really awful.”

Tieger recalled that a number of LGBTQ+ people end their lives by suicide.

“The support of one parent lowers the risk of suicide by 40 percent,” said Tieger. “I am sure we all know people who are at-risk. If you know somebody who does not have parental support, it’s very important to support them.”

Lynnfield Pride Planning Committee member Kathryn Price said the celebration was an opportunity for people to learn “how to be a better ally.”

“I want to raise my kids in a home and in a town that has the clear message that you are loved and valued just as you are,” said Price. “I am here because we have work to do at all levels.”

Price also told the story of her late uncle who passed away from AIDS when she was a child.

“I had never heard of AIDS, and I was told not to tell anyone because they wouldn’t understand or might be frightened,” said Price. “I did not understand this message, but I followed the rule.”

Price said her uncle passed away after he came to visit her family for the holidays.

“My gentle, kind and funny uncle taught me how to play ‘Moonlight Sonata’ on the piano, played endless games of ‘Life’ with me and had a throaty laugh that gave you no choice but to laugh along with him,” said Price. “Years later, my mom shared how difficult my uncle’s childhood was. He was bullied and hurt by his classmates, and considered ending his life countless times. He was lonely that no one was like him. I can’t imagine how a single child or adult could feel this way.”

Price recalled that she has raised money for AIDS charities while running the London, New York, Boston and Chicago Marathons in her uncle’s memory.

“I am proud to share that I am going to run my last two marathons in support of the Lynnfield High School and Lynnfield Middle School GSAs,” said Price. “These clubs will use these funds for resources, activities and actions that I hope will underscore the message from all of us. You are loved, you are cared about, we are here to do better ourselves, and we are here to help our community do better. We are glad that you are here exactly as you are. Happy Pride.”

After Price concluded her remarks, she was given a round of applause.