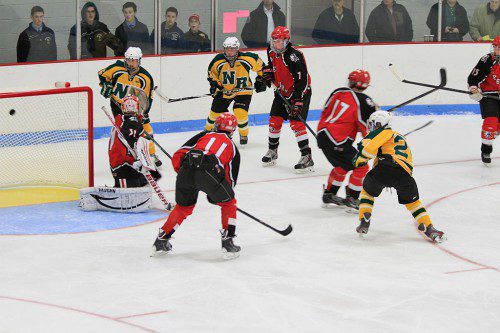 JUNIOR PATRICK DRISCOLL finds the back of the net for North Reading. (Stephanie Tannian Photo)

“It is not often you get a chance to play the defending Division 2 state champions,” pointed out North Reading head coach John Giuliotti. “They have a great program there even though they are not as good as they were last year.”

Corey Collins had the first period goal for the locals 5:49 into the game. Mike Driscoll and Tyler Calos both assisted.

The Panthers tied the game one minute into the second on a penalty shot. Jared Valade then gave the Hornets the lead for good when he lit the lamp with only 14 seconds left in the second. Calos and Driscoll both assisted on that goal as well.

At the 7:10 mark of the third, Collins scored again with Pat Driscoll and Nick Day assisting.

With a minute left, the Panthers pulled their goalie for the extra attacker but Pat Driscoll scored an empty–netter with 35 seconds left to round out the scoring. Sean McGreal assisted.

The Hornets outshot Beverly on net, 21–17, as goalie Nick Ponte made 16 saves.

Last Saturday afternoon, also at home, the Hornets blanked Pentucket, 7–0, to go to 5–2 in the Cape Ann League.

“I was happy with our spread out attack,” stated Giuliotti, as seven different players scored.

North Reading outshot the Sachems, 48–13, on net as Ponte made 13 saves to post the shutout.

On Saturday afternoon at 3:10 p.m., the Hornets travel to the Valley Forum in Haverhill to take on host Amesbury. Next Tuesday night, North Reading host Masconomet at 8 p.m. at Burbank.