International friendly soccer jamboree with China was fun for all 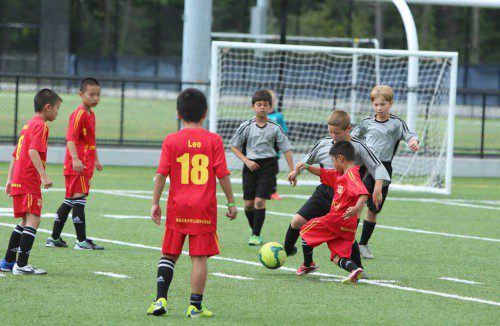 SEVERAL players of the Wakefield Warriors U10 boys’ soccer team (gray uniforms) battle for a loose ball during a recent soccer friendly against the Chenzhen Randall Football Club from China. The Lynnfield Avengers and North Reading Stingers also took part in the event which was held last weekend at Lynnfield High School. (Donna Larsson Photo)

LYNNFIELD — Four boys’ U10 soccer teams from Lynnfield, Wakefield, North Reading and Shenzhen, China got together on the new fields at Lynnfield High School for a soccer jamboree on Saturday and Sunday, July 25 and 26.

The Chinese team, named the Randal Football Club, was able to make the trip as part of an extended vacation coordinated by head coach Forest Lin, who is a business colleague of former LYSC Board member John Simonetti. The two share an appreciation for soccer and coaching youth teams. Over the winter Lin was visiting the Boston area on business and he connected with current LYSC Chairman and coach Steven Connolly. The two began to put together a plan for a summer exchange.

After Lynnfield and China committed to a date, Connolly reached out to other neighboring towns to make the experience more enjoyable for all and increase the number of games without repeating opponents.

The four teams played an “International Friendly” with a series of round robin games held Saturday and Sunday. Due to some late cancellations from the China team, some additional Lynnfield players volunteered to join the Chinese Randal Football Club team for the weekend. Drew Von Jako, Lucas Cook, Christian Murphy and Henry Caulfield did a great job and were valuable teammates of their Randal FC counterparts.

The International Friendly jamboree opened on Saturday with a moment of silence in honor of Sonny Tropeano, who last played soccer in 2013 before switching to football. He was friends with the Lynnfield players and no doubt would have been in the stands smiling and cheering on his friends and making new ones.

After the games played on Saturday, the players, coaches and parents were all treated to a cookout at LHS with hot dogs and burgers generously provided by Lynnfield residents Jon Beatrice of Wild Willy’s Burgers in Watertown and Matt Monkewicz of Kayem, Inc. The boys from China were especially fond of the hot dogs!

At the conclusion of the round robin games on Sunday, the four teams were evenly divided up by each head coach to create four mixed squad teams. Each team was composed of players from North Reading, Wakefield, Lynnfield and China and this was perhaps the highlight of the weekend.

After playing each other competitively, the boys switched gears seamlessly and were playing on teams alongside their opponents and having a ball.

These games were reduced in time so that each mixed team was able to quickly play each other in a 20-minute running time game.

After the final play of the game, the teams gathered at center field to accept International Jamboree medals presented to all players.

Randal FC coach Forest Lin also distributed special gifts to all players direct from China. In a special showing of kindness, several of the local boys exchanged jerseys with their new-found friends from overseas.

The experience provided a lifetime of memories for all involved.