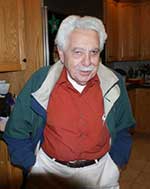 He grew up in Dorchester, attended school in Boston and graduated from Boston Latin High School. While in school he worked afternoons and weekends in a shoe factory and later at the Boston Naval Shipyard cleaning out submarines. He served during World War II as a civilian employee as the assistant to the Naval Commander Shipyard in Boston. While there, he invented a faster Gatling-type loading system for torpedoes that reduced the firing time between each round. He also invented a hand-held device to make instant French fries.

He continued his studies at Boston University. He was then recruited by the Boston Post. After its closing in 1956, he opened his own advertising agency, Sacks Advertising, which he operated until 1975. In 1975 he saw a new trend in portable trade show displays. He became one of the pioneers of the exhibit industry and is still well-known today as one of the grandfathers of the industry. He was active working with the Boston Fire Department to create Fire Prevention Week and was made an honorary chief of the department. For many years he was active in community theater playing many character roles.

After retirement, he spent many summers at his lake house in Moultonborough, N.H. He still was very active as a member of the Governor’s Council on Disabilities and was instrumental in the passing of laws to benefit the disabled. Most of all, he loved spending time with his family, especially his grandchildren, friends and colleagues. He was a gentleman with a wonderful sense of humor, always at ready with words of wisdom or a witty remark and willing to lend a helping hand.

He is survived by his wife Roselyn; his daughter Stefanie, his son Stanton and his wife Judith; his grandchildren, Neal and Jessica; his nieces, Jackie and Jennifer, and many cousins and friends.

There will be a celebration of his life held on Saturday, November 12 at 1 p.m. at the Salem Country Club, 133 Forest St., Peabody, MA 01960. In lieu of flowers the family is asking for donations to be sent in Irving’s memory to: The Autism Research Foundation c/o Dr. Margaret Bauman, 72 East Concord St., Boston, MA 02118.