It’s good to be Pedrini

#5 commits to Tufts University for 2017 season 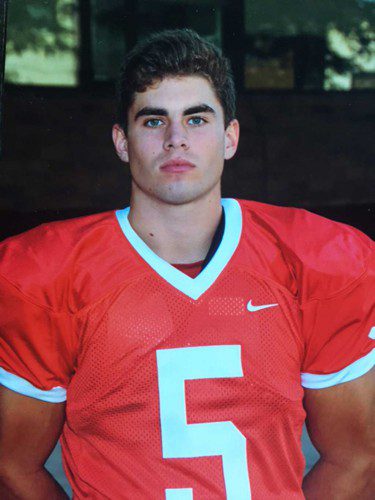 Melrose Red Raider Mike Pedrini has committed to play for the Tufts University Jumbos in the 2017 football season. Pedrini led the division in touchdowns with 28 this year and 63 high school career TDs. (courtesy photo)

MELROSE — He’s had the football career high school athletes dream of, and now he will be a Tufts University Jumbo.

Melrose Red Raider football player Mike Pedrini has committed to play for the Tufts University Jumbos in the 2017 football season. The Melrose senior captain has accumulated eye popping stats in his four years of football play at Melrose High and is a two team Middlesex Freedom League MVP, including this year when he led Melrose to their third straight league title and an 8-3 season.

Pedrini was an integral part of Melrose’s back-to-back trips to Gillette Stadium in 2014 and 2015, including the Raider’s undefeated season in 2015. His footprint is left on two seasons were near magical for Melrose and leaves with 63 career touchdowns and 3,500 rushing yards.

This year Pedrini enjoyed his best season to date, leading all of Div. 2A with 28 touchdowns, which puts him within the top five of the entire state. He has already clinched an All Scholastic nod by The Boston Herald and The Boston Globe, a repeat honor in both cases and will represent Melrose in the 2016 Shriner’s All Star Classic.

When reached by the Melrose Weekly News Pedrini stressed the work of his fellow senior captains Steve Abbott and Collin Casey, along with seniors Luke Karelas, Josh Roderick, Cameron DiBiccari, Connor Crovo, Pat Whelan, Jake Yezerski, Scott Raia, all star Antonio DiFronzo, Nick Anderson and Christian McAree as vital to their historic run. Whether it was having lanes opened by the tackling of Collin Casey, Antonio DiFronzo and Pat Whelan or offense from senior captain receiver Steven Abbot, Pedrini is thankful for being the beneficiary of their work from sophomore to senior year.

“Football is the ultimate team game and without all 11 guys working together nothing happens,” says Pedrini. “They’ve been the best friends I could ever ask for. We have poured blood, sweat and tears together and I would not trade one second playing football with them for anything in the world.

The 18-year-old Melrose resident is the son of Rick Pedrini and Liz Higgins and brother to Lauren, 16, Diane, 9 and Matthew, 5. Pedrini attended the Horace Mann school as a child, and began playing football in third grade at age 9.

While it’s common to see incredible talent lured away to private schools, Pedrini gave no thought to leaving Melrose High, even when drawing interest during those underclass years. “Growing up in Melrose and going to the games on Friday nights, I always wanted to be a Red Raider,” he says. “After playing for the middle school team, I knew that the program was as special as I had envisioned. The pride of playing for my city and going to a great public high school made it a very easy decision; best one I’ve made.”

And becoming one of the best MHS players of all time didn’t require much more than the dedication to the Melrose High weight room and its conditioning program. It certainly helped on the lacrosse field, where Pedrini is also potent. The three year starter and two time All Star holds the record for most season goals by a middie at 56 and his work has helped Melrose reach consecutive playoff appearances.

Yet it’s football that the name Pedrini is synonomous with. He displayed skill his freshmen year as a quarterback with 34 touchdowns. By his sophomore year he helped lead Melrose to their first Super Bowl appearance in decades during a 12 touchdown season that included a four touchdown game against Burlington. By last season, he was up to 20 touchdowns and 1,200 rushing yards and was a make-or-break player for Melrose.

While Pedrini is known as a beast on the field, the same goes for the classroom. His high grades made his college decisions all the more competitive and brought him to the fine institution of Tufts University, where he will be reunited with former MHS teammate Jay Tyler. In short, the running back brings a solid resume to the Medford campus and will certainly be a leader for the 7-1 Jumbos, enjoying their best record in 18 years.

MWS: You’ve had an incredible career in Melrose with so many wins and upset victories. Which one (excluding Super Bowl games) stand out?

Pedrini: Woburn during sophomore year and Concord-Carlisle during junior year were very special but nothing compares to beating Wakefield on Thanksgiving and never losing to them in any high school game, 6-0. (7-0 including Freshman)

MWS: While Melrose didn’t come out on top in the two Super Bowls, which one stands out to you in your memory? And what was each Super Bowl trip like to experience?

Pedrini: It was amazing to be able to play at Gillette and play where my hero Tom Brady plays. I will always remember my TD pass to Julian Nyland last year.

MWS: What’s the best advice you’ve gotten from your football coaches over the years?

Pedrini: It’s so hard to pick one piece of advice from a coach but the Melrose program is built on hard work. We work so hard all year and our coaches push us to be the best on and off the field. It has certainly paid off and will continue to pay off for all of us in the rest of our lives.

MWS: You are going to play at Tufts. Was there another school that was in contention? What made you want to be a Jumbo?

Pedrini: I narrowed it down to Tufts, Williams and Amherst. It was a tough decision, but the location, size and overall atmosphere made Tufts the best fit for me. All of the coaches who recruited me were great and I am happy to be able to play for Coach Civetti next fall. As happy as I am to be a Jumbo, I will miss being a Red Raider more than anything.

MWS: What would you like to major in during college or pursue long term?

Pedrini: I am not sure what I want to study yet. I am looking forward to taking courses to try and find something that I really love and want to pursue.

MWS: You have a lot of young football fans in Melrose who want to be like you when they grow up. What advice do you have for them?

Pedrini: School is more important than any sport and my academic record has opened as many doors for me as athletics have. Hard work is more important than talent and if you work your hardest you can achieve your goal. Our team really appreciates all of the young fans because we remember when we were in their shoes. If any of them ever want to talk, I would love to get a chance to meet them.

Pedrini: Thank you to my friends and family, especially Dad and the best Mom in the world, and my biggest fans Mimi, Matty, Gina, and Kaitlyn who support me in everything that I do no matter what. Thank you to all of my coaches, especially Coach Morris, for molding me into the football player and person I am today. Thank you to all my teachers for pushing me in the classroom.

Thank you to the whole Melrose community for coming out every Friday Night and supporting us. I am so proud that I had the opportunity to play football for the city that I love, and I will miss it more than words can describe.