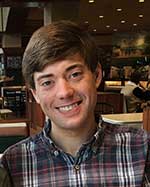 MELROSE — Jack Waaramaa, 22, a lifetime resident of Melrose, passed away on Monday, May 23.

Jack was born in Boston on Aug. 19, 1993, one of three children to Eric and Leigh (Ballweg) Waaramaa. He graduated from Melrose High School in 2012 and was scheduled to graduate from the University of Massachusetts-Boston on May 27 with a bachelor of science degree in Biology. He planned to initiate his graduate work in the fall.

Jack was a lover of sports. He enjoyed his many years playing baseball in the Churchill American Little League, Melrose Babe Ruth and for Melrose High School and always cherished the teammates and coaches he was fortunate enough to play with and for. Although Jack disliked being the center of attention off the diamond, he was never happier than when pitching from the mound. He was also a diehard Red Sox and Patriots fan and was fortunate enough to attend many rolling rallies with family and friends to celebrate their championships.

Jack loved animals — of every size and species. Hiking the trails of the Middlesex Fells Reservation was a passion, but Jack’s hikes always took a little longer because he had to check for critters under every rock and log. Stone Zoo was like a second home growing up, visiting (and collecting bird feathers) every weekend.

He also loved to snorkel with fish and turtles and did so in Hawaii, Cancun, Cozumel and at many other beaches. He volunteered at the Northeast Animal Shelter, taking care of homeless pets and was the loving owner of Crosby, his golden retriever. The two could be seen walking and running the streets of Melrose every night.

Jack may have only lived 22 years but he packed each one with more fun and laughter than most people could ever hope for — and was always willing to share it with others. He served as a camp counselor at the Melrose YMCA Sports Camp and Campus KIDS for many years. He always thought of himself as just a “big kid” and enjoyed playing the games and sports as much as the campers did. His enthusiasm was contagious and his smile would light up a field.

Jack’s memory will live on in the hearts of his family. He will be lovingly remembered as the beloved son of Leigh A. Ballweg and Eric R. Waaramaa of Melrose. He was the cherished brother of Alyssa and Faith Waaramaa of Melrose. He was the devoted grandson of Constance Waaramaa of Nashua, N.H. and the late Jackie Waaramaa, and the late Doris and George Ballweg. He was the loving nephew of Keith Ballweg and his wife Diane of Gardner, Nan Weaver and her late husband Tyre of St. Augustine, Fla., Kim Johnson and her husband Chip of Lunenburg, and Christine Leskouski and her husband Michael of Bedford. Jack is also survived by many loving cousins, classmates and friends.

Relatives and friends gathered in honor and celebration of Jack’s life during visiting hours at the Robinson Funeral Home, 809 Main St., Melrose on Friday, May 27 from 4-8 p.m, and for his funeral service on Saturday at the Faith Evangelical Church, 200 Franklin St., Melrose at 10 a.m.

Interment in Pine Ridge Cemetery, Chelmsford. Contributions to honor Jack’s memory may be made to Northeast Animal Shelter, 347 Highland Ave., Salem MA 01970 or to the Friends of the Fells, 235 West Foster St., Melrose MA 02176. For online tribute and condolences visit RobinsonFuneralHome.com.