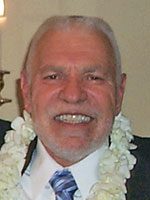 MELROSE — Mr. James A. Romano, 72, a resident of Melrose, passed away peacefully on Sunday, October 4, 2015 at the Sawtelle Family Hospice House.

Jim was born in Yonkers, New York and was one of two children of the late Dominick and Concetta (Ferrugo) Romano. Born and bred in Yonkers, Jim’s father died in World War II before Jim could meet him. His childhood was characterized by the care and support of his mother and his loving relatives in NY. He attended Yonkers High School before going to Assumption College in Worcester, where he received his bachelor’s and master’s degrees in education.

In the late 1960’s, Jim met his first spouse Cosmo Stefany, creating a life together that would last 28 years until his passing in 1993. After the unfortunate passing of Cosmo, Jim met David Fish in 1994 and formed a loving commitment and partnership recognized by their wedding ceremony on October 23, 2004 in the home they shared in Melrose. Jim worked for Stoneham High School as a history and drama teacher for over 30 years.

Jim was first and foremost a teacher. He was a dynamic teacher who valued people, his relationships, his students, and had a profound and lasting effect on people in his life. He took particular pleasure in watching other people succeed, and was the driving force behind the theatre program at Stoneham High. He saw theatre as an opportunity and vehicle to enhance his student’s lives. As a student in his production, you learned to speak more clearly, you learned to tell a story in words and actions, and you learned to believe in yourself. He directed many plays, coached every student who spoke at every assembly, and volunteered to chaperone every dance. He inspired his students not only to develop their talents, but to come together in a community. He was a constant source of encouragement for students to find new abilities and a sense of belonging they did not know existed. And in return, his students were inspired with a new sense of loyalty and devotion.

A well known storyteller, he used his captivating, deep and New York accented voice to capture the attention of his audience. He truly believed in fate, and making the world a better place with his positive presence and respect for others. He often said “you only get to leave when you’ve learned the lesson.” He valued honesty to his family, friends, and students above anything else. Jim was larger than life but at the same time humble and unassuming. He was gregarious, dramatic with a million stories filled with life and humor. Jim was a man with a passionate love of life and an endless capacity for friendship and compassion.

Jim was happiest when surrounded by the people he loved. Christmas celebrations at home were a highlight every year, and any time spent with Dave was cherished.

Jim was the beloved spouse of 21 years of David J. Fish of Melrose. He was the cherished son of the late Dominic and Connie Romano. He was the loving son-in-law of Marie Fish of Chelmsford, and the late Robert Fish. He was the devoted brother of Marie Wirchansky and her husband Robert of Yonkers, New York. He was the dear brother-in-law Roger Fish and his wife Phyllis Tura of Bedford; Linda Blum and her husband Frederick of Ipswich; and Carole Cammaratta and her husband Edward of Westford. He is also survived by three nieces and four nephews.

Relatives and friends gathered in honor and remembrance of Jim’s life during visiting hours at the Robinson Funeral Home, 809 Main St., Melrose on Thursday, Oct. 8. Interment at Hope Cemetery in Kennebunk, Maine will be private. For online tribute, directions, or to share a memory visit RobinsonFuneralHome.com.