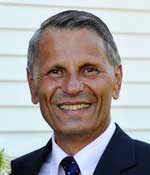 WAKEFIELD — John Boghos, 58, a well-known Wakefield native, died at the Kaplan Hospice House in Danvers surrounded by his family on Friday, Oct. 23, after a lengthy battle with early onset Alzheimer’s.

John was known best for his love for his family, his high energy level, an ability to always put a smile on your face and never losing touch of his childhood spirit. He had a passion for life, his beloved Patriots and enjoyed time during the summers on Cape Cod with a cigar and a cold Blue Moon in hand.

He was the president of Joseph’s Middle East Bakery for over 20 years and was a key reason the now signature Joseph’s pita bread can be found in so many local and national grocery stores. John also founded Bagel Boy in 1992 with partner Chuck Bouchrouche and again, was a key factor in growing sales for the company. Before becoming president at Joseph’s, John worked at NCR Corporation from 1980 to 1990.

John was born in Damascus, Syria and came to the United States in 1959 when he was 2 years old. He attended Wakefield High School (Class of 1976) and went to the University of New Hampshire (Class of 1980). He excelled at wrestling for the Wildcats and joined Sigma Beta, a fraternity that forever shaped the remainder of his life through everlasting friendships and endless stories.

He was a fixture in the Wakefield community where he served on the School Committee from 1998 to 2007. He and his siblings Ray, Nabil, Deda and Grace, grew up on Crescent Street and then moved to Prospect Street where lasting memories were made around his father’s pool.

His funeral will be held from the McDonald Funeral Home, 19 Yale Ave., Wakefield on Wednesday at 9 a.m. followed by a funeral Mass celebrated in St. Joseph Church, 173 Albion St., Wakefield at 10 a.m. Interment to follow at Forest Glade Cemetery in Wakefield. Visitation for relatives and friends will be held at the funeral home on Tuesday, Oct. 27, from 4 to 8 p.m..