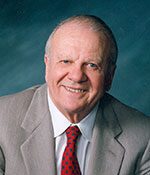 Born on the Smith Farm, the site of Pocahontas Tavern and Springs in Lynnfield, on Oct. 17, 1925, he was the son of the late Joseph F. and Della (Rich) Smith.

John was raised in Lynnfield and was a graduate of Wakefield High School, Class of 1942. He later graduated from UMass Amherst with a degree in Chemical Engineering after serving in the United States Navy during World War II. He was retired from the Commonwealth of Massachusetts, serving with MEMA; he spent his career in the sales and marketing field.

Among his passions were boating, fishing and hunting, which he enjoyed with friends and relatives. He was a lifelong skier, continuing to enjoy the sport well into his late 70s, when he could no longer find contemporaries to ski with.

Following in the footsteps of his father, John was a dedicated public servant for his country, his state and his hometown of Lynnfield. He was cheerful and active and known for his involvement in town organizations including: Finance Committee, Planning Board, Lynnfield-Wakefield Rotary, chairman of the Zoning Board Appeals, a delegate for the Lynnfield Republicans Committee, member of the Lynnfield Center Water Commission, an alternative Town Moderator, and finally a member of the Masons of both Lynnfield and Gloucester.

He was the beloved husband of Ann B. (Bishop) Smith, with whom he shared 43 years of marriage. He was the loving father of John Gary Smith of Amesbury, Lindsay Smith Barkan of Natick, Leslie Smith Olson of Lynnfield, C. Christopher Eaton of New Hampshire, Bradford Eaton of Groton and Scott Eaton of New Hampshire. He was the brother of L. Marie Vazzana of North Carolina. He is also survived by his 10 grandsons: Zachary, Taylor, Wesley, Randy, Spencer, Matthew, Mark, Alex, Brett and Brian.

The funeral service will be in the Centre Congregational Church, 5 Summer St., Lynnfield on Tuesday at 1 p.m.

Interment will be at Forest Hill Cemetery in Lynnfield. Visitation for relatives and friends at the McDonald Funeral Home, 19 Yale Ave., Wakefield on Monday from 4 to 8 p.m.