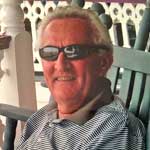 WAKEFIELD — John F. “Jack” Curran, 71, of Wakefield, died peacefully on Tuesday, May 26, surrounded by the love of his family, after a long and courageous battle with cancer.

Jack was a graduate of Wakefield High School in the Class of 1961 and later earned a bachelor’s degree from Northeastern University. He served in the United States Air Force in Vietnam from 1967 to 1968 during the Tet Offensive and earned the rank of Staff Sergeant.

Jack had a long career as an account manager in the grocery business. He worked and retired from C and S Wholesale Grocer, and prior to that, worked for Star Market for over 30 years.

Jack was a member of both the Wakefield Elks and the West Side Social Club.

Jack was an avid golfer, skier, traveler and photographer. He was a strong and supportive husband, brother, father and “Papa,” and found his greatest joy in life to be caring for and spending time with those he loved, especially his six adoring granddaughters.

Jack lived his life with extreme courage, optimism and hope, despite the many struggles and losses he faced along the way. His zest for life taught those around him to find joy in the simple pleasures of each day and to never take a single day for granted.

Jack’s legacy lives on in the hearts of his six adoring granddaughters: Casey, Riley, Shaun, Katelyn, Emily and Bridget.

His funeral will be held from the McDonald Funeral Home, 19 Yale Ave., Wakefield on Monday at 10 a.m. followed by a funeral Mass in St. Florence Church, 47 Butler Ave., Wakefield at 11 a.m.

Visitation for relatives and friends will be held at the funeral home on Sunday 1 to 5 p.m.

Interment will be at Forest Glade Cemetery, Wakefield.