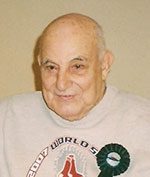 Born in Cambridge on Nov. 18, 1922, he was the son of the late Henry and Elizabeth M. (Leahan) Collins. Jack was raised in Reading and was a graduate of Reading High School, Class of 1941.

After being discharged, Jack worked for the U.S. Post Office in Reading for 37 years and retiring in 1985. He has been a resident of North Reading for the past 54 years and a member of St. Theresa Church. He was a member of the American Legion and Marines Fourth Division.

Jack will forever be remembered by family and friends for his great sense of humor and catch phrases. His outgoing and bold personality could take over a room. Whether it be at a family function or the many ballparks he and his son John would visit together.

Anyone who came across his path would get a handshake and an explanation on why people would shake hands. He had a gift of gab that would make everyone feel at ease. Jack was very patriotic and was a proud member of the U.S. Marine Corps, serving right out of high school in World War II.

Jack was also an avid fan of all sports but an even bigger supporter of his grandchildren sporting events.” Papa” was their No. 1 fan and often could be heard encouraging and often offering advice to them. His family was his pride and joy.

Mostly, he will be remembered as a family man, who always put his family before himself. He loved spending his winters with his oldest son, John in Clearwater, Fla. The world is a less friendly place now but if you had the pleasure of meeting Jack Collins, you were better for it.

Family members include his loving sons, John P. Collins Jr. of North Reading and Joseph P. Collins Sr. and his wife Dianne of Georgetown; daughters, Jacqueline King and her husband Bob of Reading, Elizabeth Donaldson and her husband Jeffrey and Maryann Murray and her husband Michael, all of North Reading; 10 grandchildren, Jennifer, Jacob and Katie Donaldson, James King, Joseph Jr., David and Ana Collins, Max, Mason and Marshall Murray; he was the brother of the late Joseph and Henry Collins and Mary Demonico.

His funeral will be held from the Croswell Funeral Home, 19 Bow St., North Reading on Thursday, Sept. 10 at 9:15 a.m., followed by a 10:30 a.m. funeral Mass at St. Theresa Church, 63 Winter St. (Rt. 62), North Reading. Calling hours on Wednesday, Sept. 9 from 4 to 8 p.m. Burial will be in Forest Glen Cemetery in Reading. In lieu of flowers memorial donations may be made in his memory to: PTSDusa.org, Combat Trama, helping wounded warriors, veterans and their families suffering from combat related PTSD or to the American Cancer Society, P.O. Box 22718, Oklahoma City OK 73123. croswellfuneralhome.com.