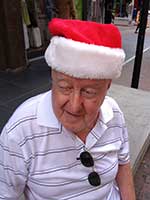 MELROSE — Joseph B. O’Brien passed away on Christmas Day, December 25, 2016 at Massachusetts General Hospital in Boston.

He was born in Melrose on March 19, 1931 to the late Edward P. and Grace A. (Walsh) O’Brien. Joseph was raised in Melrose, graduated from Melrose High School, Class of 1950, and had been a lifelong resident.

Mr. O’Brien attended the University of Wyoming, left school and enlisted in the U.S. Army. He served his country with pride in the U.S. Army during the Korean War and was a highly decorated veteran, recieving two bronze stars for his bravery.

After his discharge he returned to Melrose and worked as a truck driver for Pier Fish & Seafood Company in Medford for over 40 years.

He was a longtime member of Most Blessed Sacrament Church in Wakefield where he was instrumental in developing the Boy Scout Troop 725 in Wakefield. Joseph was a Boy Scout leader for over 30 years retiring in 2005, 3 years as a Cub Scout leader, 20 years as a scout master and 10 years with the National Catholic Committee on Scouting.

He loved to travel with his two sons and family meant everything to him.

Joseph was the beloved husband of the late Rebecca “Rita” (Laverty) O’Brien. He was the cherished father of Christopher E. O’Brien and Kevin M. O’Brien, both of Melrose. He was the caring brother of the late Eleanor, Eddie, Bobbie and Dotty. He was the loving brother-in-law of Matthew and Eleanor Lafferty of Wakefield, Patricia and Jim Gallagher and Michael and Theresa Laverty, all of Greenock, Scotland. Also survived by numerous nieces, nephews and friends.

The funeral was from the Gately Funeral Home, 79 W. Foster St., Melrose, on Thursday, December 29. A Mass of Christian Burial was held at Most Blessed Sacrament Church, 1155 Main St. Wakefield.

n lieu of flowers contributions in Joseph’s name may be made to the National Catholic Committee on Scouting @ www.nccs-bsa.org.

To send a message of condolence please visit www.gatelyfh.com