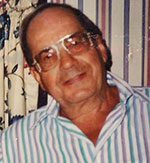 BOURNE — Joseph L. Viveiros, 89, of Bourne, formerly of Florida and North Reading, died Wednesday, April 8, 2015, at the Bourne Manor in Bourne. He was the beloved husband of 43 years to the late Beverly A. (Rogers) Viveiros, who died on April 3. Joe was a retired 25 year member of the North Reading Police Department, he served from 1956 to 1980.

Born in Fall River, on June 2, 1925, he was the son of the late Joseph and Georgianna (Pavao) Viveiros. He was a graduate of Lowell High School. Joe was a U.S. Army Veteran of World War II. He served from 1943 to 1946 and was a Technician Fifth Grade. He was a Paratrooper and served a year in Germany.

Joe also built and sold homes for many years and he managed a few restaurants. He also bought and sold boats and he volunteered with the Bourne Harbormaster. Joe was a member of the National Rifle Association and Wounded Warrior Project.

Joe loved his wife Beverly with all his heart and soul, they were both soulmates. They loved spending time together, shopping, cooking and boating together. He was man of his word and always meant what he said. If you were a friend or loved one of Joe’s, that he really cared about, he would do anything for you and would be there for you. Basically Joe is “What you saw, is what you got”.

Joe had many hobbies including boating, fishing, cooking, clam digging and would give away stuffed quahogs to everyone he loved. He loved making his famous Kale and Chicken soup. Joe loved going on vacations, living in Florida for some time and buying cars.

He is survived by two sons, Michael Viveiros of Nashua, NH and Steven Viveiros of Lawrence; his daughter, Maria Amaral of Florida; his dear friends, Elizabeth Eddy, John Routhier and Tom Colbert, all of Bourne and Bud Siroomian of Weymouth.

His funeral Mass will be held, together with that of his wife Beverly, will be held at at St. Theresa’s Church, 63 Winter St., (Rt. 62), North Reading on Thursday, April 16 at 10:30 a.m. Interment will be in the Massachusetts National Cemetery in Bourne at 2:30 p.m. Calling hours wee held at the Croswell Funeral Home, 19 Bow St., North Reading on Wednesday, April 15. Memorial donations may be made in his memory to: St. Jude Children’s Research Hospital, PO Box 1000, Dept. 142, Memphis, TN 38101-9908. www.croswellfuneralhome.com