Warriors posted an 18-1 record with lone blemish to Arlington 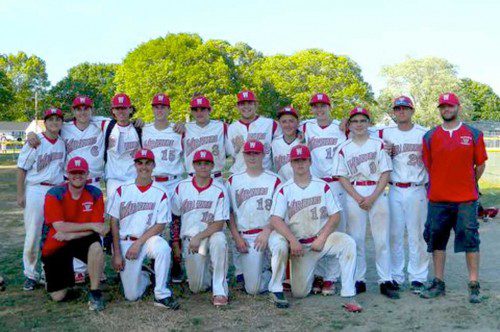 WAKEFIELD — It is very tough to have a perfect season in any sport at any level. The Wakefield Memorial High JV baseball team achieved that great feat in 2014 and came pretty darn close to going undefeated once again this past spring.

The Warriors posted an 18-1 record and had another incredible season. Wakefield outscored its opponents, 170-43, and had a team batting average of .409. Ironically those numbers were even better than the Warriors posted in ‘14 when they went undefeated.

The lone blemish came against Arlington on April 29 at Pierce Field in Arlington.

“To start the season this team had a lot of pressure on them from what last year’s undefeated team accomplished,” said Head JV Coach Tom Leahy. “We set the same goal as we did last year because we felt we had the talent to run the table for the second year in a row. This team had heart (and) it had grit and it was determined to replicate a perfect season. In my opinion we did not fall short of our goal. While we did not go undefeated this year, having just one loss in 19 games is an incredible accomplishment for these kids and something that is nearly impossible in the game of baseball. It says a lot about them that they set such high standards for themselves and followed through on it.”

Wakefield had a core group of six juniors, who for the last two years played their majority of games on JV, and together they led the JV baseball team to an incredible 37-1 record over two seasons and going undefeated at home, never losing at Moulton Field. Melanson, Marchino, Murray, Kane, Thomas, and Chanley were the backbone of what the Warriors have accomplished the past two seasons and all six took on big leadership roles this year to lead the sophomores that were on the team according to Leahy.

Wakefield started the season at 6-0 until it played Arlington. The Warriors started the game with four quick runs and it looked like Wakefield was going to roll as usual. But Arlington had a great second inning and hung nine runs on the Warriors and even though Wakefield chipped away the Spy Ponders held on for a 9-6 victory.

“After the winning streak was over it would have been easy for us to have a letdown and lose a few games but we ripped off 12 more wins to finish the season 18-1, which is a testament to the talent and attitude we had on our team,” said Leahy. “Two victories over a very tough Reading team that only lost a few games was one of the highlights of the season. We had a pitching staff that would flat out overpower teams and a lineup that wore down other team’s staffs and always seemed to get a few big hits with men on base to open games up.

“I could not be more proud of our guys for the season we put together and our coaching staff is very excited about how bright the future is for the Warrior baseball program,” added Leahy.

“I also want to thank my assistant coach Brian Millea,” continued Leahy. “Brian is a former captain for the Warrior baseball team and a former captain of the Endicott baseball team. His commitment and knowledge of the game are second to none and he is a huge asset to not only the JV team but the varsity team as well. There is no one I would rather have coaching with me. We would not have had two great seasons without him.”

With a number of players most likely moving up to the varsity there will be several holes to fill in 2016. But with several returning players and freshmen coming from the highly successful ninth grade program which also posted a winning record, the future of the Warrior JV baseball team and the entire WMHS baseball program is bright.