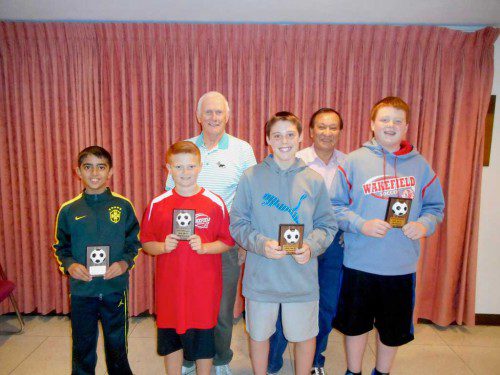 KNIGHT OF COLUMBUS Soccer Challenge winners with their plaques. In the front row (L to R) are Yehya Zeineddine, William Townshend, Logan Cosgrove and Liam Cosgrove. In the back row (L to R) are K of C soccer chairman, Bob Curran, and Grand Knight Vinny Gonzales

The competition was open to all boys and girls, ages 9 through 14.

Last year, William Townshend was the state champion for the 10-year-old boys and the year before he won as a 9-year-old. Last year Liam Cosgrove finished second in the state finals after winning the title as an 11-year-old.

It was most unfortunate that no girls showed up for the competition.

Each competitor had 15 kicks at the goal from 12 yards out with ropes dividing the goal into different scoring areas. The top kicker for the boys was Liam Cosgrove with a 140 score. Logan Cosgrove and Lucas Pastore each had a 135 in the 12-year-old completion, but Logan won in the three kick shootout.

Each contestant was given a certificate noting their participation while the winners will receive a Council Champion Certificate and a Champion Plaque.

These winners competed in the K of C North Regional Soccer Challenge for Districts 22-35 and 54 on Oct. 3 at the Greater Lawrence Technical School in Andover. At that level of competition everyone had 25 kicks from 12 yards after three practice kicks.

The state finals will be on Nov.15 at Nichols College in Dudley.