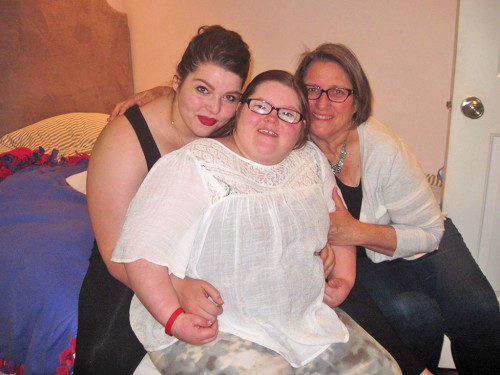 KAYLA SNOVER (center) has a dream of one day becoming a news reporter. Kayla’s dream has been strongly supported by her sister Lane (left) and mother Donna. (Gail Lowe Photo)

LYNNFIELD — For someone who aspires to become a news reporter, Kayla Snover, 19, is off to a good start. She knows the right questions to ask, and she has started with herself.

Since last September, the Lynnfield resident has been working on a film titled “Kayla’s Life and Tour” at the WCAT studio on Hemlock Road in Wakefield. The film details her loves and passions and these include television programs, music and plays.

Scott Kurland, technical director at the studio, said that Kayla has a “wonderful energy to her” and that he enjoys working with her on her project.

“Kayla comes to the studio with a smile on her face, and she always wants to learn,” he said. “She has a passion for whatever she does.”

Kurland said that Kayla came to the studio with no editing experience, but in as few as two sessions she knew where she wanted to place things in her film.

“She is incredible to work with,” Kurland said.

When Kayla visits the studio, she is accompanied by Tammy Hua, her EMARC specialist.

Though born with Down Syndrome, Kayla is not allowing her condition to get in the way of her personal and professional pursuits. Instead, she is embracing it as part of who she is as a human being. Executive Director of WCAT Tom Stapleton said he is in full support of helping Kayla.

During the school years, on Mondays and Wednesdays of each week, she studies at Lynnfield High School. On Tuesdays, Thursdays and Fridays she attends classes at Salem State University where she is continuing her studies, and she will have a paid internship at the school this coming fall.

Her favorite studies, she said, are math and geography. She also loves current events and takes copious notes during news broadcasts.

Perhaps her greatest claim to fame to date is having been part of a “Destination Imagination” team from Lynnfield High School that went to Tennessee in 2014 to compete at the global finals in Knoxville.

Destination Imagination is a non-profit organization that fosters creative problem solving and teamwork. Every year, 250,000 students across America and in more than 40 countries participate, and Kayla was counted among those students. Last year, five Lynnfield teams advanced from local and state tournaments, which earned them the right to represent Massachusetts at the finals.

The competition required that students solve a challenge in one area of concentration, including technical, scientific, structural, fine arts, improvisational or community outreach.

Kayla worked in a team of approximately seven students from September through March to solve their selected challenge with no outside interference or help from anyone.

“The competition required students to make costumes, build sets and design technical devices,” said Kayla’s mother Donna Snover. “Kayla’s team solution involved a sorcerer, knight and 10-foot dragon. Most of the props and costumes were made from recycled materials. Banner Glass Shelmar contributed many of the boxes used to create the props and scenery.”

For their generosity, Kayla baked chocolate chip cookies for the staff at Banner, a company on Water Street in Wakefield, to show her appreciation, her mother said.

Kayla’s team also was given permission to fundraise at Honey Dew Donuts to help defray the cost of attending the global finals. The motorcyclists who patronize Honey Dew at the head of Lake Quannapowitt in Wakefield donated generously to this fundraising effort, said Donna.

As it turned out, Kayla’s team placed first at the global competition last year.

In Wakefield, Kayla also has made her mark.

Michelle Salemah, owner of J’Adore Consignments on Main Street, said she is happy to have made the acquaintance of Kayla and has welcomed her to work in her store. Several days a week, Kayla arrives at J’Adore with Hua and places price stickers on shoe boxes, organizes jewelry and hangs up dresses. She also has advised customers on what looks best.

“I listen to customers and help them pick out outfits,” Kayla said, taking a moment to pet Peppy, the family’s Shih Tzu, during an interview. “I like to make people feel good. And I think Michelle is a great person. She’s pretty — just like me.”

On weekends, Kayla can be found in Wakefield playing challenger basketball at the Galvin Middle School. She also might be spotted having lunch or breakfast at Brothers Restaurant and Deli or dinner at Duck Walk with her friends or family, which also includes her father David and sisters Lane, 18, and Morgan, 22.

And speaking of “walk,” Kayla has participated in the annual Buddy Walk around Lake Quannapowitt sponsored by Down Syndrome Foundation.

Regardless of where Kayla’s life path leads, she is bound to be successful because of her winning attitude.

Aptitude testing shows that Kayla’s strengths lie in communications and the arts. In fact, she loves to sing and once performed adaptive ballet at the Boston Ballet. This being the case, it should come as no surprise to anyone that one day they might see Kayla’s name in lights.