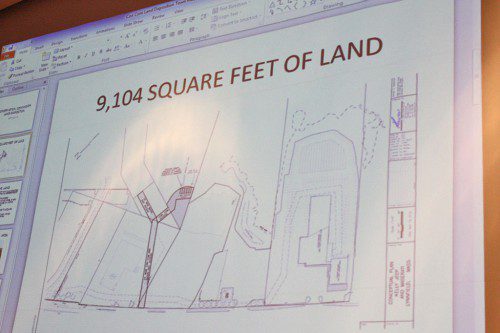 THE 9,104 square foot parcel of land that Brian Kelly wants to purchase from the town for $170,000 is shown in the shade area of this site map displayed at Town Meeting. (Maureen Doherty Photo)

By approving Article 13, the voters have authorized both the Board of Selectmen and the Conservation Commission to convey 9,104 square feet of conservation land at 353-385 Broadway to Jeep Kelly Chrysler of the same address for not less than $170,000 in cash plus a permanent access easement for the town to the Bow Ridge Conservation Area for recreational purposes, along with a permanent easement for five parking spaces for the recreational users of the town’s Bow Ridge property.

Additionally, replacement property of equal size is required to be given to the Conservation Commission and will most likely be located on the adjacent Kelly Nissan property.

The $170,000 purchase price is to be dedicated for the purchase of future conservation land by the ConCom.

The 9,104 square foot parcel is part of a 2.29 acre parcel of land that was conveyed to the Conservation Commission in 1996. This parcel has been used for parking purposes under licenses granted by the ConCom originally to the former Big Dog Restaurant and currently to Kelly Jeep, which purchased the property where the restaurant was located.

Kelly Jeep was represented at Town Meeting by Attorney Marc Kornitsky, who gave a brief slide presentation explaining the multiple steps involved in making the land sale and swap possible.

Kornitsky stated the $170,000 being offered by Kelly came from an independent appraisal he had done and exceeds the appraisal the Conservation Commission received that pegged the value at $115,000.

Since the use of the land as automotive storage is not being changed, it will not impact the neighborhood, he stated.

The attorney explained several steps would be necessary if the article was approved, This includes approval of the land sale by a two-thirds vote of both the state House of Representatives and the state Senate followed by a “favorable recommendation from the Executive Office of Environmental Affairs.”

Additionally, the town would issue a Request for Proposal (RFP) making a bid on the property open to anyone with an interest in purchasing the land.

If Kelly is the successful bidder, the company would seek the permits necessary to build the new Jeep building from the town.

A site visit to the property was held with owner Brian Kelly last month and attended by abutters as well as members of the Planning Board, Conservation Commission and Board of Selectmen.

During the site visit, Kelly revealed his multi-year plan to consolidate the parcels he owns for the various dealerships. This includes leveling the currently terraced parking and car storage areas as much as possible (this could be limited due to the presence of ledge) to better facilitate circulation within the site. Lowering the grade of the parking lots will reduce the current impact of the property on abutting neighborhoods because the light poles will also be lowered, possibly by several feet.

The site visit revealed that the combination of existing woods on adjacent Lynnfield Water District land plus a small parking lot owned by Herb Chambers and the existing Lynnfield Commons apartment complex provide a buffer between the Kelly Jeep property and the nearest single family residential neighborhood on Canterbury Road.

Kelly eventually wants to build a new Jeep Chrysler building behind the existing Jeep building before razing the old building. Pulling it further away from frontage on Rte. 1 will make access and egress from the site and within the parking lot safer, he believes.

Kelly has also spent four years negotiating to get the properties off septic and tied into the sewerage system on Rte. 1. This means that the raised septic system that had been necessary when the Big Dog was in operation will eventually be removed, making way for the grade of that lot to be lowered as well.

He has also welcomed the mountain bikers who use the Bow Ridge conservation land area on a regular basis, including setting up a bike washing station for them to use free of charge.

The voters had approved taking Article 13 out of order at the suggestion of Selectmen Chairman Phil Crawford to prevent a delay on the article in case the meeting lost its quorum. A hand count was taken on whether to take it out of order and revealed 158 in favor and five opposed, which was 17 short of the quorum of 175. However, since no one challenged the quorum the meeting was allowed to proceed.