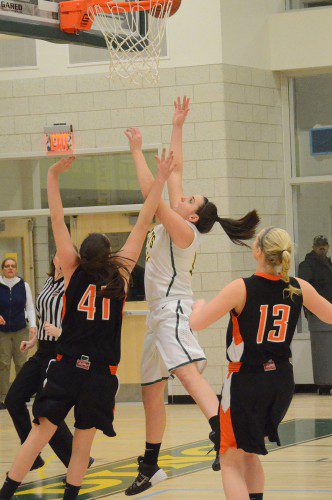 FIRST POINTS. Senior Frankie Elliott got things off to a good start for the Hornets by scoring the game’s first points in the tournament against Ipswich. (Bob Turosz Photo)

Trample Tigers 56-41 in first round of states

NORTH READING — The Lady Hornets advanced to the Division 3 North Quarterfinals with their 56-41 home victory over the Ipswich Tigers in the first round of the state tournament on February 24.

Junior Jess Lezon had a monster game with 23 points and 8 rebounds. Sophomore Katerina Hassapis was the only other player in double figures with 10 points.

Senior Frankie Elliott gave North Reading a quick lead with her basket just five seconds into the game. Senior captain Adrianna Flanagan and junior captain Carly Swartz each hit a huge 3-pointer in the first quarter to give the Hornets a 14-8 lead at the end of one.

After North Reading expanded the lead to nine the Tigers clawed back to within five at 20-15 at the 4:36 mark of the second quarter. But the Hornets responded. They closed the first half on a 10-0 run and took a 30-15 lead into halftime.

There wasn’t much offense to start the second half. North Reading outscored Ipswich 8-7 in the third quarter and took a commanding 16-point lead into the fourth.

The Hornets lived at the free throw line in the fourth. They started the quarter five for six from the line to expand the lead to 43-24 at 6:38. North Reading shot 14 of 16 from the charity stripe in the fourth to salt away the 56-41 victory.

The second seed Winthrop Vikings ended the Hornets’ season with their 51-33 victory in the Division 3 North quarterfinals in the state sectional tournament on Friday night. Katerina Hassapis led the way with 10 points.

North Reading got off to a quick 3-0 lead thanks to a 3-pointer from Hassapis just 19 seconds into the game. Unfortunately the Vikings answered with a 14-3 run and took a 14-6 lead at the 1:36 mark.

But Jess Lezon closed the first quarter with two straight baskets to cut the lead to 14-10 after one.

At the start of the second quarter Winthrop went on another scoring binge to increase the lead to 12 at 5:58. The Hornets managed to trim the lead to five with a little over two minutes remaining in the first half, but Winthrop was able to take a 29-21 halftime lead.

The wheels fell off for the Hornets in the third quarter and Winthrop put the game away. North Reading only managed two baskets and was outscored 14-4.

The Vikings took a commanding 43-25 lead into the fourth. The deficit got as high as 25 in the final quarter and Winthrop cruised to the 18-point victory.

It was the second time in as many years that Winthrop cut the tournament hopes of the Hornets short. North Reading finished its season with an overall record of 13-9 and a 1-1 run in the tournament.