Lady Raiders on the kill after falling to Notre Dame 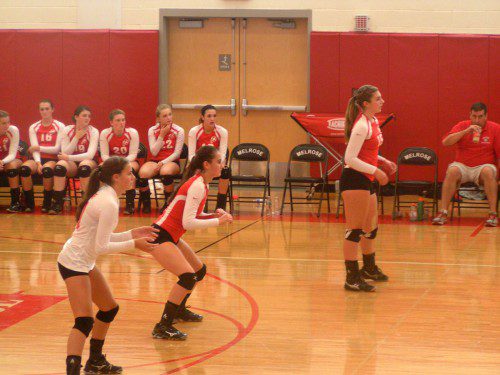 THE MELROSE Lady Raider volleyball team may have lost their first game of the season against State Champion Notre Dame of Hingham but they bounced back with a 3-1 win over Division 1’s Central Catholic on Monday. Melrose is 10-1 overall and undefeated in the Middlesex League.
(Jennifer Gentile photo)

MELROSE — It’s not every day that the Melrose Lady Raider volleyball team loses a game. But when it comes in the hands of a current state champion it’s a little easier to live with.

Paired against the Div. 2 reigning champ Notre Dame Academy of Hingham on a road contest last Friday, Sept. 26, undefeated Melrose went into the game risking a perfect record for the sake of preparing themselves for the state’s best in postseason. The undefeated Cougars are an opponent Melrose may run into when they look to reclaim their state champion status.

The Lady Raiders are 10-1 overall and remain undefeated in the Middlesex League at 7-0.

Melrose coach Scott Celli purposely loads his non-league schedule with monster competition, using them as a measuring stick for Melrose’s own success. By doing this the Lady Raiders enjoyed a first-ever victory against Newton North earlier this season but on Friday failed to top Notre Dame, a team now ranked #1 statewide after upsetting Barnstable last week.

Because Notre Dame and Melrose are both Div. 2 teams, all roads to a state title must go through the Cougars. That is not an impossible task since Melrose stole a set from Notre Dame last Friday and battled to numerous ties in sets one and four. Some minor adjustments could increase Melrose’s chances of an upset in post season, should they go that far.

“We know we can play with them,” says Coach Celli. “They played a little better that night, a couple points here or there and it could have gone the other way. Our best play comes out against the best teams. We did a lot of good things during the game. We haven’t figured out a way to beat them yet, that’s what we’re working on.”

Set one saw Notre Dame take a 4-0 lead but Melrose tied it up at 5, 6, 7 and 8. From there the teams swapped leads and Melrose lead 14-13. The Lady Raiders evened it up at points 23 and 24, thanks to some heavy hitting from Meri Lessing but Notre Dame took victory in a final 26-24 first set, which set the tone for the night. Melrose had six service errors that largely contributed to loss of points. Set two was all Notre Dame, as they extended leads of 11-7 and 14-11 into a 25-18 set loss for Melrose, though Victoria Crovo battled well for Melrose in attack. In set three the Lady Raiders came to life with 13 kills, including four from Hannah Mulcahey and Lessing and three from Victoria Crovo and two from Marissa Cataldo. That helped them take their lone win of the night.

Melrose took leads in set four at 5-2 and 8-3 but Notre Dame went on an 8 point run. The two teams were locked in ties of 11, 12, 16 and 18. After Notre Dame took an edge at 22-20, Melrose stole the lead at 23-22 after kills from Lessing and Nolan. Notre Dame battled back for the next three points, ending the hard-fought match of titans.

Despite taking their first loss of the season, Melrose rebounded on Monday night at the Melrose Middle School gym by beating a Div. 1 Central Catholic, 3-1. After a 25-13 first set loss Melrose would like to forget, the Lady Raiders rebounded with three straight set wins of 25-14, 25-16 and 25-14 for the final 3-1 victory. Melrose took a 4-0 lead in the second before the two teams evened it up at points 8 and 11, thanks in large part to Central’s Catholic solid serving. Four kills from Meri Lessing, two from both Marissa Cataldo and Cat Torpey helped Melrose take a larger lead along with some well-timed service errors on Central’s part. Amanda Cain showed huge success in serving during the first set.

Melrose hit their stride in the third set with a massive attacking, 16 kills in total. Despite trailing a few points in the beginning, they leveled Central with hitting, thanks to Meri Lessing (4 kills) Hannah Mulcahey (4 kills) and Victoria Crovo (4 kills) and some well executed kills by Allie Nolan.

Senior libero Amanda Cain had an especially strong showing for Melrose, deftly handling digs from some of Central’s more powerful hitters and overall stellar serving. “Amanda has been great for us. She had big shoes to fill coming in this season and has done everything we have asked of her,” says coach Celli.

Ashley Harding also proved some excellent back row defense while Allie Nolan proved unrelenting in her setting, tallying another game of double-digit assists. The dependable Nolan was often able to steer Melrose back on course, with eagle eyed hole-spotting that allowed her to maneuver well-placed kills that helped break tie points.

The fourth set came all to easy for Melrose, as they ran to a 17-7 lead and didn’t look back. Melrose had 15 kills total, including five from Mulcahey, three for Victoria Crovo, two from Nolan and Cataldo, and three from Stephanie Crovo, who had her strongest game of the season with tough front row blocking.

After the win against Central Catholic, Melrose coach Scott Celli spoke of the lessons learned from their first loss of the season. While clearly the coach is happy where the team is, there is work to be done. “We’re not where we want to be, we want to get better, work on our team communication. We know have the athletes to do it.”

Melrose embarks in a road trip for the remainder of the week against Wakefield (Wednesday, post-deadline) and Watertown (on the road Friday) before hosting Lexington on Monday at 5:30 in what should be considered a fairly competitive game, though Melrose should have an edge.