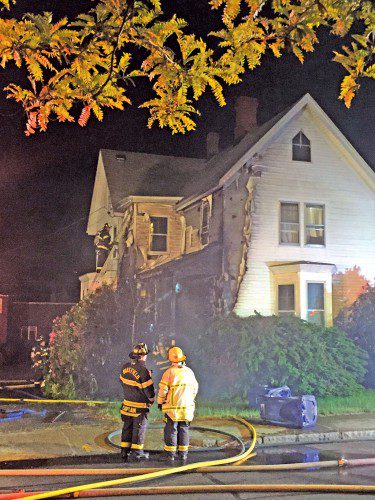 A FIRE at this home on Lake Street last night displace three occupants. The blaze was believed to be caused by careless disposal of smoking materials. (Keith Curtis Photo)

WAKEFIELD — Careless disposal of a cigarette was determined to be the cause of a two-alarm fire at a two-and-a-half story wood frame house on Lake Street last night.

The fire, called in just before 9 p.m., was confined to the exterior of the home thanks, in part, to tight-pack cellulose insulation inside the walls, said Fire Chief Michael Sullivan today.

The first alarm was sounded at 8:47 p.m. by a neighbor who spotted smoke and flames in the area of the home’s front porch and entry way. The first-floor tenant, a woman who told Sullivan she had disposed of a cigarette in nearby brush, was home but the two occupants on the second floor were out at the time of the fire. No one was injured, including the woman’s pet cat, but all three occupants were displaced.

When Wakefield’s Fire Captain Randy Hudson and his crew arrived one minute after the first alarm, the fire was quickly knocked down, said Sullivan

“The home is a two-and-a-half story wood frame colonial and it has what is known as balloon construction,” he continued, explaining that balloon construction means space between the interior walls and exterior remains open, but because the Lake Street home was insulated with tight-pack cellulose the fire did not extend beyond the outside of the home.

“We were fortunate,” Sullivan said.

The owner of the home lives out of state but was eventually contacted later last night about the blaze.

Responding to the second alarm were engines from Stoneham, Melrose and Reading. The North Reading Fire Department sent a ladder truck.

The towns of Saugus, Lynnfield and city of Woburn covered Wakefield’s headquarters until firefighters returned sometime after midnight.

“It’s been very dry,” said Sullivan. “People really need to be careful when they dispose of smoking materials. Be careful around brush, too.”

Sullivan estimated that damage to the Lake Street home was in the thousands of dollars.

In addition to this call, firefighters over the weekend responded to 34 calls, 19 for medical aid.