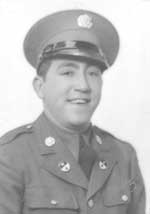 EVERETT— Leo P. DeFilippo, 97, of Everett, formerly of Medford and Chelsea, entered into rest on Friday, June 10 in the Chelsea Soldiers’ Home.

Born in the Roxbury section of Boston, Leo lived in Medford for most of his life.

He was the former proprietor of the Gloria Food Store in Malden. Leo also worked for many years at Dom’s Sausage in Malden and AVCO Research Laboratory.

Leo served in the U.S. Army during World War II and recently received the “Chevalier” of the Legion of Honor Award by the President of the French Republic.

He was a late longtime member of the Retired Men’s Club of Arlington, the American Legion of Medford and Veterans of Foreign Wars in Medford.

He was the beloved husband of the late Viola (D’Andria). He was the dear brother of the late Joseph, John and Mary DeFilippo, Clara D’Agostino and Rose Sachetta. He was the brother–in–law of James Sachetta of Everett and Frances DeFilippo of Arlington. He was the loving uncle of Dorothy Groose, Fred D’Agostino, Dr. John DeFilippo, Sandy Juliano, Jim Sachetta, Joe Sachetta, Rainy Leonard, Steve Sachetta and the late Diane Phillips. Also surviving are several loving grandnieces and great–grandnephews.