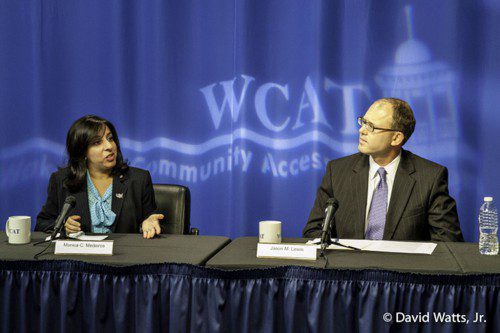 MONICA MEDEIROS AND JASON LEWIS squared off in a state Senate debate for the second time in six months. (David Watts Jr. Photo)

The race between Lewis and Medeiros, a Melrose alderman-at-large, is a rematch of the Fifth Middlesex District special election race held on April 1. Lewis narrowly defeated Medeiros by only 1,390 votes across the district. The state senator received 10,610 votes while the GOP nominee had 9,220 votes. Lewis took the four Winchester precincts in the district, Malden and Stoneham. Medeiros carried Melrose, Wakefield and Reading.

Medeiros and Lewis disagreed on whether or not voters should approve Question 3 at the ballot box, which would repeal a 2011 law allowing resort casinos to open in Massachusetts.

Lewis, who voted in favor of the controversial casino law three years ago, said he would be voting no on Question 3. He said his vote was a “very difficult decision,” but said he believed the law’s pros outweighed its cons.

“I did support the legislation because I thought it will bring a significant number of construction jobs and permanent jobs to Massachusetts, as well as revenue that our state will use to fund local aid and education,” said Lewis.

Lewis said the law was carefully crafted and noted local communities had the final say about where a casino could be located. He also said the law seeks to address any potential social issues associated with casinos such as gambling addiction. Lewis also noted if voters vote to repeal the law, it would cause “chaos” because the Gaming Commission has already issued casino licenses to Everett and Springfield and a slot’s parlor license to Plainville.

“I don’t believe the benefits of a casino outweigh the ills,” Medeiros added. “There has been a lot of talk about the jobs that might come, but there is a lot of social ills that comes along with it.”

Lewis and Medeiros were also split on ballot Question 1, which seeks to repeal the 2013 law that automatically increases gas taxes according to inflation.

The current state senator said he would be voting no on Question 1. He said the Federal Highway Administration determined recently that 53 percent of the state’s bridges are “either structurally deficient or functionally obsolete.” Lewis said more than 1 million motorists use the state’s top 10 structurally deficient bridges each day. He also said potholes and bad roads cost residents $23 billion dollars in car repairs annually.

“We are all paying out of our pockets because of bad roads,” Lewis added. “If question 1 were to pass, it would take approximately $1 billion out of our transportation funding system over the next decade.”

Medeiros said she would be voting yes on Question 1. She said she opposes indexing tax increases to inflation.

The Melrose alderman at-large also said the law serves as a cop-out for Beacon Hill lawmakers because they can wash their hands from taking tough votes.

“I think (the law) takes away the legislator’s accountability,” said Medeiros. “I think legislators are there to be representative of the people and accountable to people, and should have to answer for these votes. For something to go up into perpetuity is not wise.”

Lewis and Medeiros also had different opinions on Question 2, which would expand the state’s beverage container recycling law to include all non-alcoholic containers.

Medeiros said she opposes Question 2 because it would be a hassle for people and said most communities have curbside recycling programs.

Lewis said he supports the ballot question because it will “increase the recycling rate” by expanding the state’s beverage container law and would reduce litter.

The state senate candidates were also asked whether or not they believe the Chapter 70 education funding formula is currently fair.

The GOP nominee said she supports a law introduced by state Senator Bruce Tarr (R-Gloucester) that would re-establish the Chapter 70 budget review commission that would be tasked with reviewing the education funding formula the state uses.

Lewis said he has worked diligently over the past five-and-a-half years to “maximize Chapter 70 funding for all of our communities every year to its target level.” If Lewis is re-elected next month, he said he would work to make sure Chapter 70 funding is more equitable.

The two candidates are also said local aid is important to the communities located in the Fifth Middlesex District.

Lewis said local aid is “critically important” for local services such as police departments, fire departments, senior centers and libraries. He said local communities suffered during the Great Recession because “revenues fell off a cliff.”

“As the economy has come back, we have seen state revenues bounce back and we have been able to restore that local aid,” said Lewis.

Medeiros said local aid is a “focal point” of her campaign. She commented, “We have seen state spending increase, but we have seen local aid actually decrease as a percentage of the state budget.”

The Melrose alderman-at-large also accused Lewis of voting to cut off further debate about local aid a day after he was elected state senator on April 2.

“I don’t think anything should be off the table when it comes to local aid,” said Medeiros. “Those are our tax dollars that come back to pay for our education, schools and roads.”

Lewis took issue with Medeiros’ characterization of the vote.

“The reason the Legislature voted not to debate further on local aid was in fact Republicans and Democrats reached an agreement in March on what levels of local aid and Chapter 70 would be in the state budget,” said Lewis.

The two candidates were asked what methods they support to address the growing opiate addiction crisis in the state.

Medeiros said Melrose has launched initiatives seeking to address the opium addiction crisis, which include launching education initiatives. She also said it’s important to tackle the crisis head on.

“When I first got involved and ran for the School Committee, we had overdose deaths and I think many communities tried to sweep these under the rug because its unpleasant and it showed a flaw in our society,” said Medeiros.

Lewis said he has had “heart breaking conversations” with parents who have children who have battled drug addiction. He said he was able to secure more funding in the state budget for substance abuse prevention and treatment. Lewis also noted he supported a law enacted in August that increases private health insurance coverage for people battling substance abuse.

Medeiros and Lewis were also asked about whether or not they support legalizing marijuana for recreational purposes to expand the state’s tax base. According to a report in the Christian Science Monitor, Colorado, the first state to allow the sale of recreational marijuana, is expected to receive between $60 million to $70 million in tax revenue this year.

Lewis and Medeiros said they both oppose legalizing recreational marijuana.

The two candidates were asked what methods they support for addressing high-energy costs.

Lewis said state officials need to look for ways to expand natural gas delivery in the state. He also supports expanding the use of green energy.

“The more we expand solar and wind, we will bring energy prices down over time,” said Lewis. “There is no easy answer, but it’s a multi-prong approach.”

Medeiros agreed with Lewis that she supports expanding the use of green energy. She also said she supports increasing education about conservation issues and said state officials need to take a closer look at the issues energy companies face.

Sardella asked the candidates if they believe there is an abuse problem associated with the way Electronic Benefit Transfer (EBT) cards are used and if so, what reforms would they support.

Medeiros said there are people who are abusing the system, which she called “offensive.”

“There are people who are working hard and it’s their hard earned tax dollars going toward these programs,” said Medeiros. “But what is more offensive is there are people who desperately need many of these services. When people abuse this system, they are taking away from both groups, especially those who need it the most.”

Lewis said he has supported efforts to correct EBT card abuse such as banning alcohol and tobacco purchases with EBT cards. He also said less than two percent of the state budget goes to welfare programs and audits have determined there is a low percentage of fraud.

The state senator said he believes certain politicians have given welfare recipients a bad rap.

“I do think its unfortunate that the use of EBT cards, which really is a euphemism for welfare, has been used as a political football by some people running for office,” Lewis added.

Reaching out to constituents

Ryan asked Medeiros if she could address some voters’ concerns that if she is elected state senator, her duties would conflict with her role on the Melrose Board of Aldermen.

Medeiros said she doesn’t believe there would be a conflict because the aldermen meet twice a month at night, while the state Senate primarily meets during the daytime. She also said she has been able to balance her professional career and her role in Melrose municipal government.

Lewis said serving as a state senator is a “full-time job” that is time consuming.

“I think there would be people in the district, particularly outside of Melrose, who would have some concerns,” Lewis added.

Lewis was asked if he believes he has been an effective state senator for the past six months.

Medeiros disagreed. She said more additional local aid funds need to be returned to the district’s cities and towns.