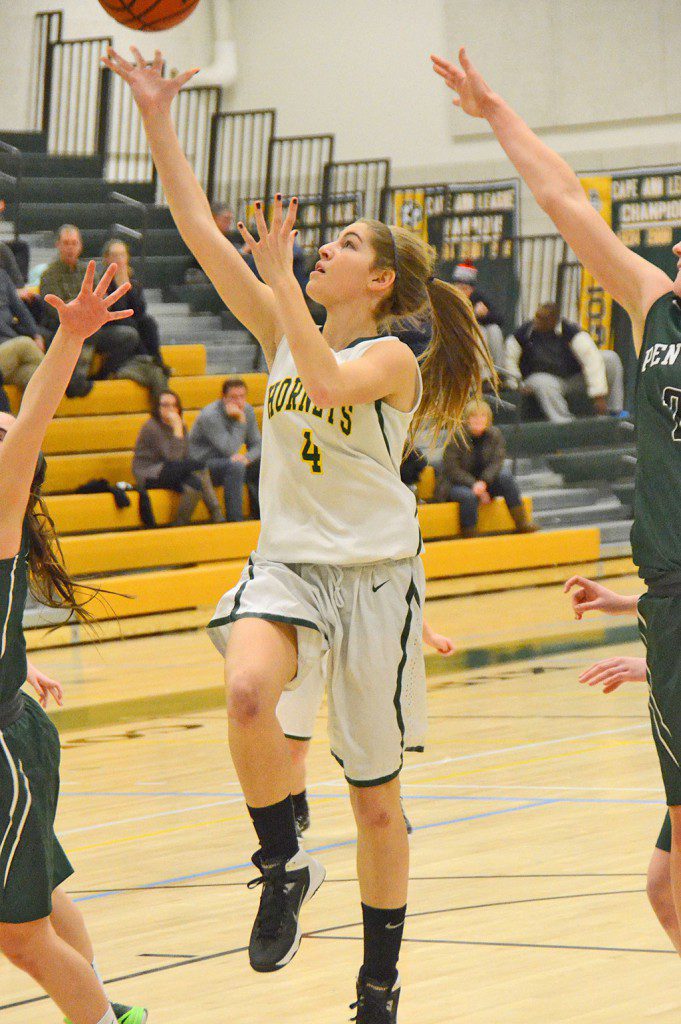 North Reading jumped out to an 8-1 lead. But the Royals fought back and were only down 10-6 at the end of the first quarter. However the Hornets responded in a big way in the second quarter. The offense clicked into high gear, outscoring Georgetown 25-10. The lead expanded to 35-16 at the half.

The Royals couldn’t muster much offense in the second half. North Reading held Georgetown to just 13 points the entire half. The Hornets coasted to the 58-29 win, improving their league record to 5-3 in the large school Baker Division.

The Lady Hornets had their second straight easy victory, destroying the Essex Tech Hawks 67-13 at home Friday night. Jess Lezon was once again the leading scorer with 16 points. Senior captain Frankie Elliott had a solid performance with 13 points.

From the opening tip the Hawks were clearly overmatched. Swartz opened the game with a three and North Reading raced out to a 7-0 lead. After Essex Tech cut the lead to 7-5 at the 5:28 mark the Hornets closed the first quarter on a 12-0 run. The lead was 19-5 after one.

Tenacious defense continued to suffocate the Hawks in the second quarter. North Reading couldn’t miss and took a commanding 44-9 halftime lead. Swartz had a superb first half with 14 points.

Nothing changed in the second half. The Hornets held Essex Tech to one field goal the entire half. North Reading outscored the Hawks 23-4 en route to the astounding 54-point victory. The win improved the team’s overall record to 6-4.

The girls defeated Amesbury Monday after press time. They will travel to Lynnfield on Friday night for a 6:30 p.m. tip-off before returning home Tuesday, Jan 27 to host Ipswich at 7 p.m.