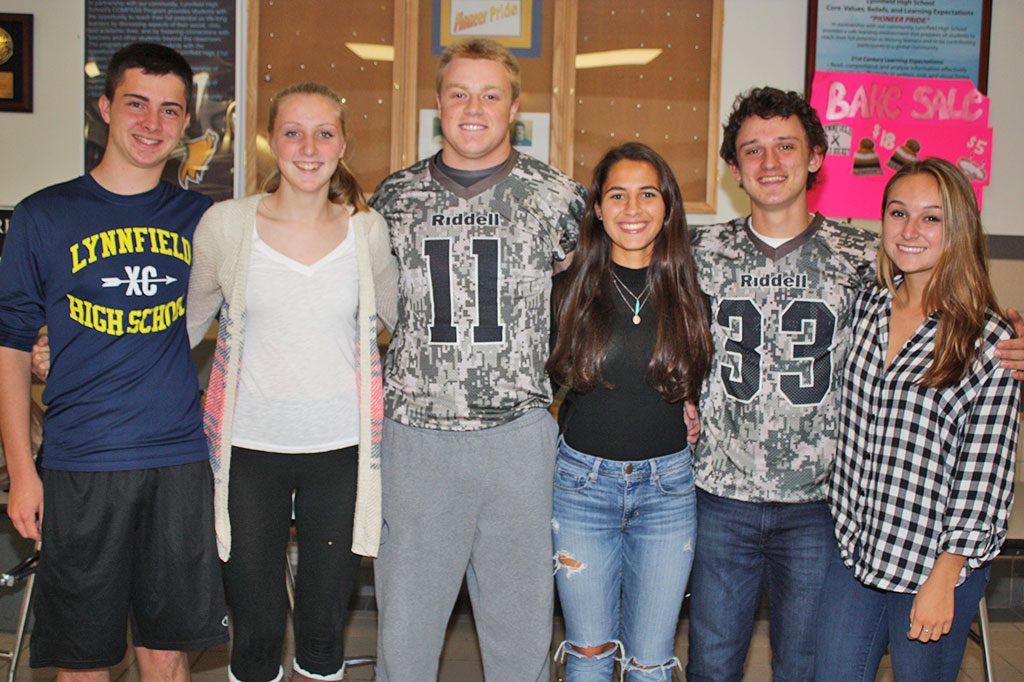 LYNNFIELD — A revamped program at Lynnfield High School is making a positive school climate even better.

The high school officially launched the Compass Program at the beginning of the school year. The program, which was originally called the Advisory Program, provides students with the opportunity to reach their full potential as life-long learners by discussing aspects of students’ social, civic and academic lives. The program also seeks to foster connections with teachers and other students beyond the classroom.

Additionally, the Compass Program provides students with the opportunity to demonstrate responsibility through ownership of personal actions; demonstrate knowledge and understanding of other cultures and beliefs; and make positive contributions in the community.

“The goal of Compass is we want to integrate more community service into the high school and not just make it a graduation requirement,” said High School Assistant Principal Kevin Cyr. “We want to get kids more involved from a civics standpoint.”

An Executive Board, commonly referred to as E-Board, is comprised of high school seniors Meryl Braconnier, Abbie Weaver, CJ Finn, Connor Reardon, Danny Bronshvayg and Renee DelNegro, leads the Compass Program. Cyr said the six board members were recommended to lead the program by the high school’s faculty.

“The Compass Program at LHS has really expanded this year,” said Braconnier. “As Executive Board members, we talk with our faculty advisors and come up with ideas to improve the program. The whole purpose of Compass is to connect upperclassmen with underclassmen and generate more school spirit and involvement in the school and raise certain issues.”

As part of the program, students get together in small groups on the seventh day of the high school’s schedule.

“When we get into our groups every week, we talk about different issues such as stress, time management and bullying,” said Braconnier. “It helps underclassmen get adjusted.”

“We are trying to create a comfortable environment at LHS,” said Weaver. “We have taken a lot of advice from students to make the groups smaller and have meetings more frequently.”

Reardon said the Compass Executive Board strives to raise student issues with the program’s advisors and teachers.

“It’s helpful because there are six students on the E-Board, which is good because we are the connection between the faculty and students,” said Reardon.

“I love being on E-Board because I feel we get to have student input on how the school works as a whole,” said DelNegro. “Compass is trying to help underclassmen feel more comfortable in the school and have them feel they can fit in and have a place.”

DelNegro said the Executive Board seeks student input about specific topics and issues, which in turn are discussed by individual Compass groups. As an example, she said Compass groups discussed stress and ways to cope with it.

“There is more student input,” said DelNegro. “If a student has a topic in mind, they can bring it up to E-Board and we can talk about that throughout Compass, which is nice.”

In addition to discussing student issues, the Compass Program has also been involved with a number of school events. The Executive Board recently planned the high school’s field day and club fair, which the board renamed Pioneer Pride Day.

The Executive Board has also been discussing potential events and community service programs. An OK Club member said that club is currently working with the Compass Executive Board to launch an anonymous blanket drive fundraiser that would support the Homeless Veterans’ Shelter and the Boston Rescue Mission.

“The idea is to donate any kind of blanket to homeless people in Boston during the winter,” the student said. “We are looking for blankets to kitchen supplies to anything that can help. We are doing it through those two organizations so we can spread our supplies all throughout Boston.”

The student said the fundraiser will entail holding a race among Compass groups to see “how many supplies” each group can donate.

Cyr noted Compass groups will most likely be holding a stocking drive in December once again.

“We had a stocking drive last year, which was great competition among the advisory groups,” said Cyr. “We are probably still going to do that again.”

DelNegro said the Compass Executive Board is looking to hold another spirit week in March as well.

“There isn’t much to do in March because sports are kind of done or just beginning, so we have been talking about holding another spirit week where we can do some fun stuff and dress up,” said DelNegro.

“There are a couple of teachers who would like to run with it,” said Cyr.

“Students got to wear the T-shirts, which is a great honor,” said Braconnier.