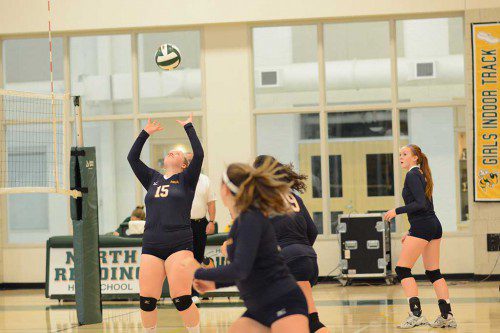 LYNNFIELD — The third seeded volleyball team began its quest for a seventh straight Division 3 North Sectional championship with a 3-0 victory over 11th seed Ipswich during the D-3 North quarterfinals Nov. 7.

Lynnfield dominated the first set from start to finish, prevailing 25-12. The Tigers played better during the second set but the Pioneers pulled out a narrow 25-21 win.

The Pioneers dismantled the Tigers 25-9 during the third set, which punched Lynnfield’s ticket to the semifinals.

If the Pioneers defeat Lowell Catholic, the locals will face either number one seed Academy of Notre Dame (21-0) or fifth seed Shawsheen Tech (16-4) in the Division 3 North finals on Saturday, Nov. 12. The game is scheduled to begin at noon at Wilmington High School, but residents should visit www.miaa.net to make sure the game’s time was not changed.