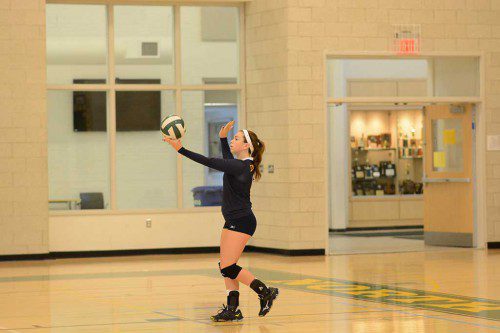 After losing the first set 25-17, the Pioneers bounced back and won the next three sets. Lynnfield won the second set 25-18. The locals cruised to a 25-14 victory during the third set. The Pioneers won the fourth set 25-20.

Senior Katie Nugent had a monster game for the Pioneers, finishing with 15 kills and 10 digs. Senior captain Olivia Pascucci had 11 digs, nine kills and an ace. Senior Camie Foley had six digs.

The Rockets secured a 25-14 victory during the first set. Reading won the second set 25-15. Lynnfield played much better during the third set but the Rockets hung on for the 25-22 victory.

After the tough loss to Reading, the Pioneers bounced back and defeated Pope John XXIII 3-0 Sept. 15.

Nugent continued her strong start to the season and finished with 20 kills and one dig. Foley had nine digs and an ace. Pascucci had seven kills, six digs and an ace. Morelli had 12 assists and three digs. Albanese had four digs and two aces.