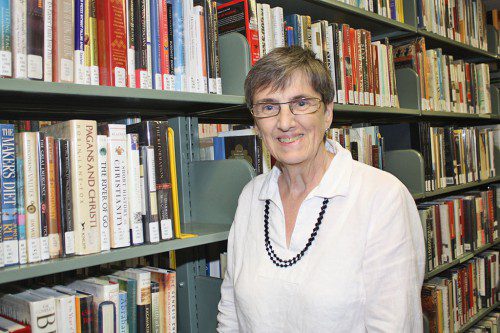 LIBRARY DIRECTOR Nancy Ryan announced last week she is retiring from the Lynnfield Public Library after leading the library for the past seven years. She has served as library director since 2008 and has worked at the library since July 1996. (Dan Tomasello Photo)

Ryan decided to retire earlier this year and informed the Board of Library Trustees at the beginning of June. Additionally, Ryan has notified the Board of Selectmen, Town Administrator Jim Boudreau and Finance Committee member Christopher Mattia of her decision.

The library director said she will retire after the April Town Meeting, where voters are expected to vote on the library building project. She said next spring is the right time for her to step aside because of two factors.

“The building project is huge,” said Ryan. “It’s all consuming and it’s an enormous amount of work, which I understood. I don’t quite have the energy that I did five or six years ago. And secondly, I believe strongly it’s time for someone who is tech savvy to lead this library and who enjoys, has fun and uses some of the newer technology. That is not me. It’s essential for the next director to be well versed in technology because that is where public libraries are headed.”

Ryan said she has enjoyed working in Lynnfield immensely for the past 19 years.

“I have gotten to know some wonderful people in the community,” said Ryan. “I am very much appreciative of the support they have provided to the library and how important they feel it is to the community. There has always been a good staff here and they have been delightful to work with. We have the best staff we have ever had since I have been here in 1996.”

Ryan has had a number of notable accomplishments over the course of her seven-year tenure as library director, all of which she attributed to the library’s staff.

“Anything that has been accomplished here is because of the fabulous staff,” said Ryan.

Ryan successfully lobbied the selectmen to restore the assistant director’s position in fiscal year 2013 after the position was “frozen” in September 2008. She is also quite proud of the renovated Children’s Room, which was completed and dedicated in November 2012. The renovated Children’s Room included new furniture, light fixtures, ceiling tiles, a fresh coat of paint and a mural painted by Shaila Desai.

Additionally, Ryan is proud the Lynnfield Public Library was awarded a planning and design grant from the Massachusetts Board of Library Commissioners in June 2014. She also worked to expand the library’s programs including Art in Bloom and the Curious about Cuisine series. She has also continued the popular BookLovers non-fiction book club that was launched in 2002.

Over the course of her tenure, Ryan said the library was able to achieve “fiscal stability and accountability through careful monitoring and apportioning of the appropriated funds.” She is also very proud the library is now open on Saturdays after townspeople requested it in a community survey included as part of the library’s Long Range Plan developed in 2009-2010.

The library director also said she strived to promote “good relationships with other town departments” throughout her tenure.

According to Ryan, the Board of Library Trustees is in the middle of creating a search committee to search for the next library director.

“We hope to have someone here by December or early January,” said Ryan. “I will serve as a consultant for the building program until the end of next April.”

Ryan said the building project will serve as her main focus area for the next nine months. The Library Trustees recently selected Newburyport-based Design Technique, Inc. to serve as the owner’s project manager (OPM) for the project. The library has also begun evaluating bids from architects to design a new or renovated library. Ryan said recently she anticipates an architect will be hired for the project in mid to late August.

In addition to the library building project, Ryan said her goal for the next nine months is to “make sure there is a smooth transition administratively and fiscally.”