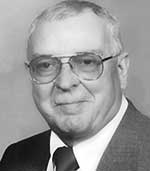 Lin was born in Poughkeepsie, New York on August 12, 1927. He received his bachelor of science degree in Pharmacy and Science from Union University, Albany College of Pharmacy and went on to work in retail pharmacy for 16 years. The next five years were spent at St. Luke’s Hospital in Newburgh, New York as a staff pharmacist. In 1972, he became the Director of Pharmacy Services at St. Luke’s until his retirement in 1989. From 1989 until his retirement in 1994, he worked as a staff pharmacist at Price Chopper in Newburgh, New York.

Lin was president of the Orange County Pharmaceutical Society for two years and served on the Board of Directors for 10 years. He was co-founder of the Mid-Hudson Valley Society of Hospital Pharmacists and served as its first president, also co-founding the hospital purchasing group. He was an active member of the American Pharmaceutical Association and the American Society of Health Related Pharmacists. He organized and chaired the first seminar on parenteral nutrition in the Hudson Valley.

He was a veteran serving in the U.S. Army Air Corps during World War II and the American Legion Post No. 1420, town on Newburgh, N.Y.

A life member of the Mohonk Preserve, he was also in the Newburgh Junior Chamber of Commerce and the “friends” group of the Museum of the Hudson Highlands. Both he and his wife were docents for the museum at the gallery at Kenridge Farm. Lin was also a member of the Historical Society of Hudson Bay and the Highlands.

He was a Sunday school teacher and Superintendent of Sunday school for many years at the Calvary Presbyterian Church and was an ordained Elder there. He went on to become a member of the Union Presbyterian Church, where he sang in the choir and served as President of the Board of Trustees. He served a total of 29 years as a ruling Elder between the two churches.

Lin leaves behind his beloved wife of almost 64 years, Nancy Ward Snyder of Hingham. He was the devoted father of Nancy S. MacLeod and her husband Wayne A. MacLeod of Lynnfield. He was “Papa” to four grandchildren, Samantha MacLeod; Katie MacLeod Murphy and her husband Tom; Duncan MacLeod; and Whitney MacLeod and her husband Harry Masters. He was great grandpa to Maverick Murphy. He was the dear brother of the late Robert E. Snyder and his wife Trudy of Springhill, Florida. He was the loving uncle to Robert Snyder, Stephen Snyder, David Snyder and Barbara S. Kearns.

There will be a memorial service to celebrate Lin’s life at the Performing Arts Center (PAC) located at Linden Ponds in Hingham on Wednesday, June 8 at 11 a.m. Following the service, there will be a collation adjacent to the PAC.

In lieu of flowers donations in Lin’s memory may be made to the Residential Care Fund at Linden Ponds. Visit www.Keohane.com or call 1-800-Keohane for directions and online condolences.