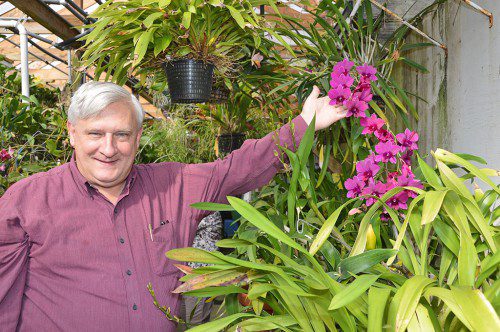 BOB RICHTER, a member of the Mass. Orchid Society, gestures towards an orchid named after his wife, Marcia Richter, in his greenhouse on Elm St. (Bob Turosz Photo)

NORTH READING – “The World of Orchids,” the annual orchid show organized by the Massachusetts Orchid Society, will be held this weekend, Nov. 6-8, at Mahoney’s Garden Center in Winchester. Mahoney’s 10,000 square foot greenhouse will feature exotic displays of blooming orchids from around the world, and one of the many orchid aficionados you’re likely to meet there is Bob Richter, North Reading’s premier orchid grower.

The MOS is excited that Mahoney’s will be the location of this year’s orchid show because it is spacious and convenient. Previous shows were held out in Boylston, Richter explained, but the remote location didn’t help the society recruit new members.

An orchid grower like Richter has to understand where these plants are coming from in order to mimic their environment and then figure out fertilization, water quality and other factors in order for them to thrive.

“The joy in growing orchids is overcoming the challenges and being successful,” he explains.

Bob’s wife Marcia agrees. “At the Orchid Society, there are people who are very into the scientific piece of it and then there are those who just think they’re pretty and grow them on their windowsill. You don’t have to be a botanist to belong to the Society. But if you’re interested, all that information is available.”

The Society has different speakers every month. “You can make it as complicated or as simple as you want to,” she added.

The meetings allow for an exchange of information between members and as well as outside information and every new member is given a plant.

Richter initially began growing roses years ago but grew distraught about Japanese Beetles eating his roses and not really being able to do anything about it. “So I looked for something else that was interesting and I came upon orchids.”

Orchids have an allure and mystique you just don’t find in most plants. “They are unique in their flower form and exceptional in the number of varieties. There are 30,000 species of orchids, all very different. You won’t find that with roses or anything else,” he said.

The ability of orchids to adapt interested no less an authority than Charles Darwin, who hypothesized the existence of a specific moth with a long tongue that could fertilize a certain orchid. The scientists of the time all laughed at him, but years later, Darwin’s moth was discovered.

“What attracts me is the complexities and the variances between the plants.”

Does Richter have a favorite? “Whatever’s in flower today,” he jokingly answers.

“I love Cattelyas,” he said. That’s a genus of 113 species of orchids from Costa Rica. “They’re big, colorful and lush flowers.”

New England used to be a center for corsage flower growers back in the ‘50s, but that has long since fallen by the wayside as commercial orchid growing has largely moved overseas. Taiwan heavily subsidizes their orchid industry, making it difficult to compete, he said. Most of the orchids consumers buy from big box stores come from Taiwan by way of California.

Richter uses three or four different mediums to grow his orchids. Some hold more moisture than others and some dry out faster. Orchids don’t grow in dirt, generally speaking. Most orchids grow on trees. They are often potted in bark mulch or in sphagnum moss, if you buy them at one of the big box stores.

Members of the Orchid Society learn how to pot and repot an orchid, and that’s one of the values of membership, Richter said. “If you want to keep your plant alive for more than a year, you need to learn how to repot orchids.”

You don’t have to build your own greenhouse, the way Richter did about 10 years ago to find the Orchid Society’s show fascinating. The show will feature something for every level of enthusiast, from beginner to advanced, including hourly tours of the displays, plant raffles, seminars and educational events, vendors of specialty orchids and growing supplies, orchid art, lessons on how judges award their ribbons and an opportunity to pick up a magnifying glass to study an orchid the size of your thumbnail.

The show is $10 per person, with MOS members and children 8 and under, free. A portion of the proceeds will help fund the MOS, a non-profit organization.

And who knows, you just might immerse yourself in a fascinating, challenging and slightly frustrating avocation, the way Bob Richter did over 30 years ago.