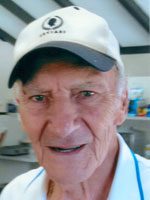 WAKEFIELD — Louis R. Sardella, 83, a Wakefield native and a longtime local educator, died at his home in Revere on Sunday, Dec. 14.

Born in Wakefield on Sept. 15, 1931, Mr. Sardella was the youngest of six children born to Elia and Luisa (Padellaro) Sardella, who were married by the ship’s captain as they immigrated from Sicily at the turn of the 20th century.

Mr. Sardella was a 1950 graduate of Wakefield High School where he was president of his class. He lettered in baseball and basketball and was co-captain of the football team.

He married his high school sweetheart, the late Anne-Marie (Pratt), and together they raised four boys: Lee, Louis, Christopher and Matthew. Matthew bravely battled the asthma that would eventually take his life in 1987 at the age of 19. (Mr. Sardella often spoke with pride of Matthew’s ability to overcome his health issues and become a star goalie for the Wakefield High School hockey team.)

The first member of his family to complete college, Mr. Sardella received a bachelor of science degree from Boston College and a master’s degree in Education from Boston State College.

While teaching ninth grade history at Wakefield High School, Mr. Sardella realized that some of his students were unable to read their textbook. At the time, “dyslexia” was a new term, unfamiliar to most people. One day, he walked into his classroom to find the textbooks piled from the floor to the ceiling. He understood that the students were sending a message: The textbooks were useless to them.

Mr. Sardella went to the principal with his concerns. He told the principal that he would like to try to help students improve their reading skills. The principal backed him but warned that he could get push back from the faculty for breaking with established curriculum.

Years later, he was touched when a former student approached him at a Christmas party at the Crystal Community Club and thanked him. The student had become a successful carpenter and steward of his union.

“Thank you, Mr. Sardella,” the former student said. “I would never have had that job if not for you. You made me what I am.”

His experiences as a teacher made Mr. Sardella a strong advocate for literacy. While serving on the Board of Trustees at the Lucius Beebe Memorial Library, he founded the Adult Literacy Program, which paired adults wishing to learn to read or improve their reading skills with volunteers for one-on-one instruction. The program continued at the library for decades.

Following his years teaching at Wakefield High School, Mr. Sardella was elected three times to the Wakefield School Committee, serving as its chairman.

Later in his career, he became Director of Special Education at the Northeast Metropolitan Regional Vocational High School. While there, he initiated a summer recreation program for physically and emotionally handicapped high school-aged kids. To help him with the program, he hired Vocational School students so that they could use the money they earned toward their school tuition.

A humble man of deep religious faith, Mr. Sardella seldom spoke of his own accomplishments. He was a founding member of the CCD programs at St. Florence Church. He was also a published author who was designated as a “Poet of Merit” by the International Society of Poets. Mr. Sardella also wrote and spoke about the power of intuition, which he believed was part of the human connection to God.

In recent years, Mr. Sardella has resided in Revere with his wife, Marie (Casale). He also enjoyed spending time in Maine and Florida.

Mr. Sardella is survived by his wife Marie (Casale), with whom he shared 26 years of marriage and three sons: Lee and his wife Mary Jo of Hampden, Louis R. Jr. and his wife Lynne of Saco, Maine and Christopher of Wakefield. He is also survived by six grandchildren: Jennifer, Danielle, Eric, Nicole, Samantha and Justin; and six great-grandchildren: Anthony, Tessa, Aleena, Owen, Aubrey and the late Christopher and many nieces and nephews. He was the stepfather of Marie Yasien and Anthony Caggiano and the step-grandfather of Alexander and Sami Yasien and Alexander, Andrew and Anthony Caggiano. He was pre-deceased by his brothers Stephen, Joseph and Leo and his sisters Rose Giambarresi and Connie Wolf.