Published in the November 1, 2017 edition 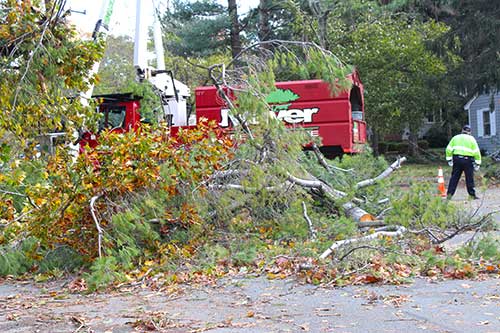 LYNNFIELD — Old trees were toppled, residents lost power, a Forest Hill Avenue home caught fire and some neighborhoods here looked like they’d lost a few rounds in a fight with Mother Nature thanks to a rainstorm accompanied by strong, howling winds that raced across the area overnight Sunday into Monday.

Power was lost in the area of Knoll Road, Summer Street at Trickett Road, Island Road, North Hill Drive, Post Office Square, Kimball Lane and a significant part of the Locksley Road area, where as many as five utility poles were felled by heavy tree limbs and had to be reset by Verizon before the Peabody Light Department could transfer its apparatus over to the new poles and get electricity back.

Firefighters went to 54 Forest Hill Ave. around 4:45 a.m. Monday to put out a fire on one side of the house. It was caused when a limb came down and took out a neutral that serves all 220 amp outlets, starting a fire inside the single family ranch-style house’s electrical panel in the basement. Crews cleared around 8:20 a.m. The home is temporarily uninhabitable.

The DPW went from one trouble spot to the next, cutting up trees and removing leaves and other debris from the public way. DPW Director John Tomasz said Summer Street just before Knoll Road was down to one travel lane as a large limb was lying on power lines, bringing them dangerously close to the roadway.

Monday school openings were not affected by the storm.

However, Superintendent of Schools Jane Tremblay said the power outages in the area led to Huckleberry Hill School losing power. She said power was restored before school started.

“We made arrangements for students to have an alternative lunch,” said Tremblay.

Tremblay said Huckleberry Hill was forced to shut off its power at 1 p.m. because crews were working to address an issue on Summer Street that could have been dangerous. She said students stayed in school until class was dismissed.

Elsewhere, traffic on Forest Hill Avenue had to be diverted just before the cemetery entrance because limbs were dragging wires too close to the ground there as well.

On Monday afternoon, Tomasz said roads all around town were “a mess,” with leaves and debris “everywhere.” Several good-sized trees had come down in high wind gusts that registered over 50 miles an hour in a lot of surrounding communities at the height of the storm overnight Sunday. The wind blew heavy during the day Monday as well.

“This could have been a lot worse,” he said. “Other areas surrounding us really got pounded. We weathered this pretty well.”

Firefighters were busy during the storm too, handling calls for damage assessment due to felled limbs striking houses Monday at 12:23 a.m. on Summer Street and at 12:45 a.m. on Grey Lane.

About an hour earlier, at 11:30 p.m. Sunday, firefighters responded to a motor vehicle accident on Walnut Street caused when a tree limb fell, struck the front windshield of a vehicle and injured a passenger.

At 3:55 a.m. Monday firefighters went to Route 128 south in the area of exit 43 (Walnut Street) to deal with a motor vehicle accident caused when the driver lost control of his car after it had struck a large puddle that had formed on the roadway.

At 4:21 a.m. fire crews went to Locksley Road after limbs came down on power lines, bringing as many as five utility poles down in the process. This would lead to the longest power outage reported Monday, affecting as many as 100 Peabody Light Department customers.

At 7:19 a.m. Monday a tree limb was down across wires on Mitchell Road.

And at about 12:20 p.m. Monday, tree limbs were reported on wires in the 700 block of Walnut Street.

The DPW’s Tomasz said cleanup from the storm would last at least a week. 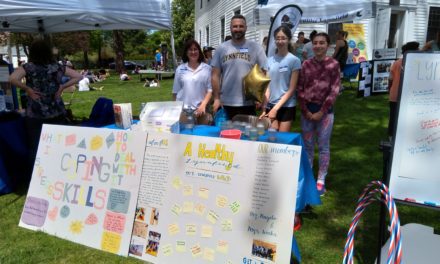