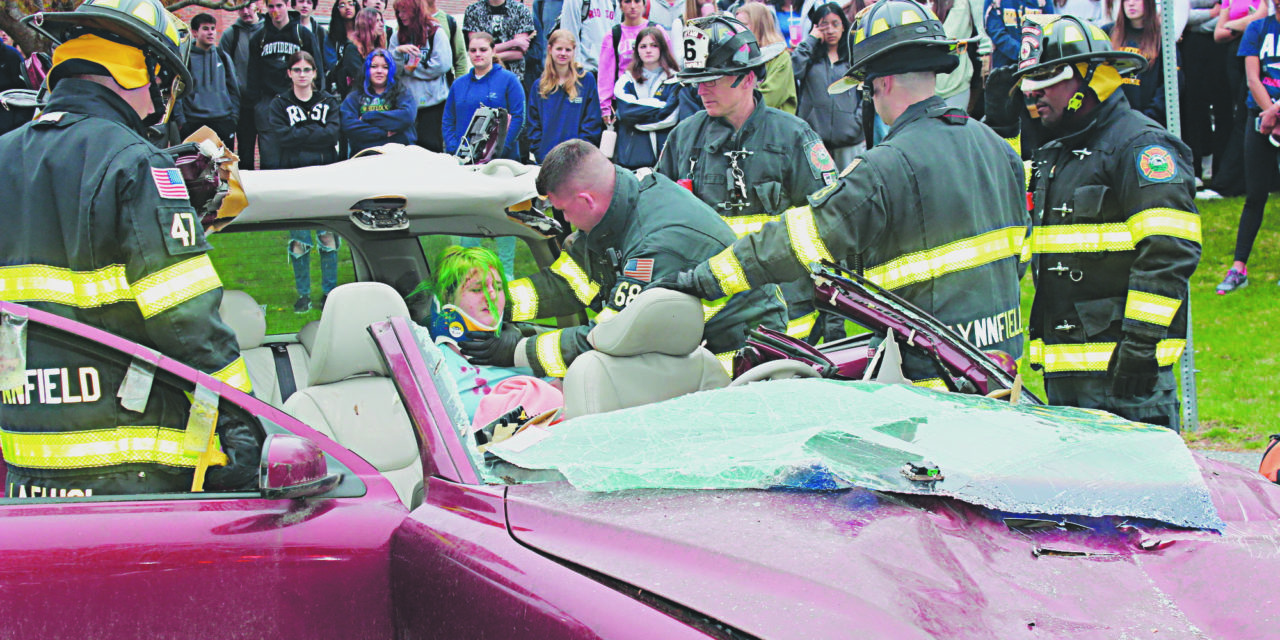 FIREFIGHTERS place a brace around sophomore Veronica Wainwright’s neck after first responders used the Jaws of Life to remove the roof of a Volvo station wagon during the Mock Car Crash staged at Lynnfield High School’s parking lot on April 26. (Dan Tomasello Photo)

LYNNFIELD — Prom and graduation season is the most exciting time of year for high school students.

While students are gearing up to celebrate the annual rites of passage, local officials and parents are concerned adolescents might make a dangerous mistake by driving drunk or texting while driving.

Lynnfield High School juniors and seniors saw firsthand the dangers of making bad decisions behind the wheel on April 26, when the Mock Car Crash was staged in the LHS parking lot once again. It has been several years since the high school has held the Mock Car Crash.

The Mock Car Crash, which featured members of the high school drama group Theatre East as well as first responders, dramatized the consequences of driving under the influence and distracted driving.

First responders arrived at the scene after a Chevy SUV collided with a Volvo station wagon. Sophomore Isabelle Moschella stumbled out of the SUV while covered in blood. She screamed in horror after discovering her friend, sophomore Maria Chambers, was killed after being thrown through the windshield.

Moschella found sophomore Madison Danese lying on the ground covered in blood after she was ejected from the station wagon. Freshman Hailey Burrill and sophomore Veronica Wainwright were both trapped in the backseat of the Volvo and were injured in the crash. Firefighters used the Jaws of Life to remove the top of the car to rescue the two teenagers, which was a challenge for first responders.

Juniors and seniors watched in horror while injured classmates were taken away in an ambulance. Students were also full of emotion as they watched a firefighter cover Chambers’ body with a white sheet.

Moschella participated in a field sobriety test that was undertaken by Police Patrolman Scott Fitzemeyer. She was arrested and charged with motor vehicle homicide and operating a motor vehicle under the influence of liquor. 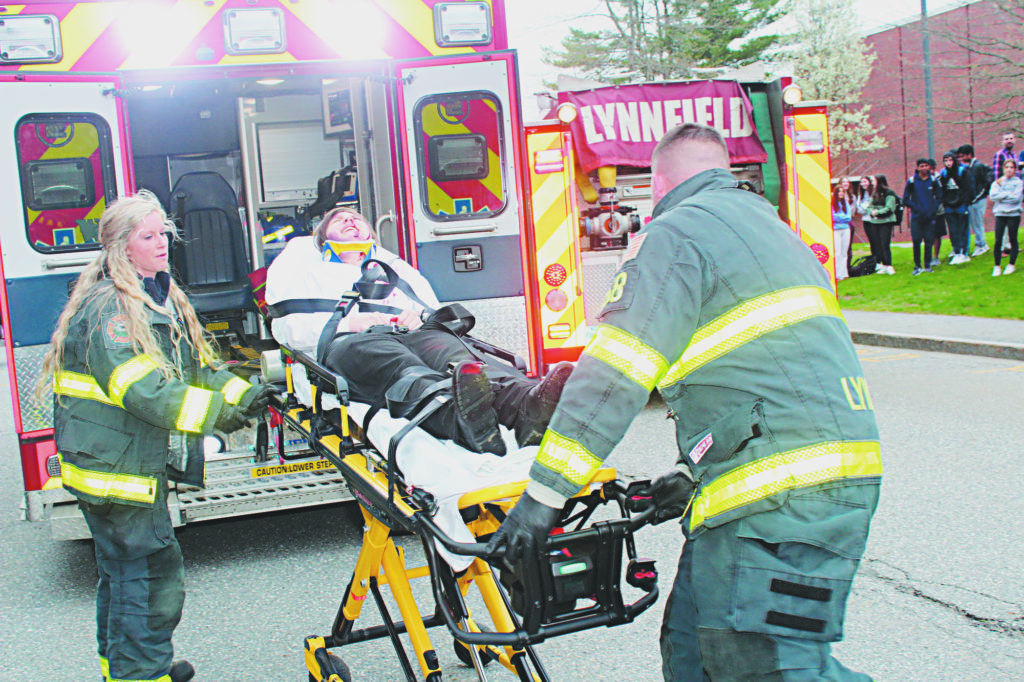 FRESHMAN Hailey Burrill lies in agony on a stretcher while being placed into an ambulance by firefighters Brittani Glinski and Anthony Moccia during the Mock Car Crash staged at Lynnfield High School’s parking lot on April 26. (Dan Tomasello Photo)

“Isabelle had been drinking and Madison had been texting,” said Bates. “When we have done the Mock Car Crash in the past, the message had been don’t drink and drive. This year, we wanted to encourage students to drive safe and make smart decisions.”

“Hopefully it will be a reality check for the kids,” said Davis. “We want them to make good decisions.”

“It sends a powerful message,” said Vogel. “I’m grateful that the high school was able to collaborate with the Police Department, the Fire Department, the District Security Team, the DPW and A Healthy Lynnfield to put this event together.”

“It was great that we were able to bring it back,” said Bates. “We were trying to plan one before COVID, but it got shut down. It’s a powerful message for our students to see. It’s not just about the dangers of drinking and driving, and distracted driving. It’s about the importance of safe driving and making smart decisions.”

Davis commended Lynnfield firefighters for demonstrating the horrors of car crashes to LHS juniors and seniors.

“The firefighters did a great job,” said Davis. “It was good training for us. We treated it like a real car accident. We treat the patients as we see them. Unfortunately, we see these types of accidents all the time.”

Theatre East Director Joey Puleo praised the performances undertaken by Burrill, Danese, Chambers and Moschella during the Mock Car Crash as well as the drama group’s crew for helping make the accident come to life.

“I’m really proud of the Theatre East performers, costume designers and makeup artists,” said Puleo. “Although the material they presented is challenging, they handled it with maturity. The Mock Car Crash sends a really important message to our Lynnfield High School community, and I’m glad that we were able to collaborate with the police, firefighters and EMTs.”

“The student-actors did a phenomenal job,” said Vogel. “They made it feel very real.”

While previous Mock Car Crashes at LHS featured a presentation by first responders after the event, A Healthy Lynnfield brought guest speaker Cara Filler back to the high school on April 26 to give a presentation to all four grades as part of her “Drive to Save Lives” tour.

Filler’s identical twin sister, Mairin, was killed in a high-speed car crash in Vancouver, British Columbia the day after her 18th birthday. In order to introduce LHS students to Mairin, Filler showed students a slide show that contained photos of her and her late sister, which included a photo of the car crash.

“I am sick and tired of car crashes being the number one killer of youth,” said Filler. “I don’t want your names to be a statistic.”

“All of your lives are worth fighting for,” said Filler.

Bates thanked the Fire Department, the Police Department, the DPW and Gaeta’s Automotive Services for helping bring the Mock Car Crash back to Lynnfield High. He also thanked A Healthy Lynnfield for funding Filler’s presentation.

“It took a community effort to plan this event and get it going,” said Bates. “We started planning the Mock Crash in January. I hope all of our students are affected by it. As we enter prom and graduation season, we want our students to have fun and be safe while celebrating. We don’t want to lose any of our students in a tragedy.”