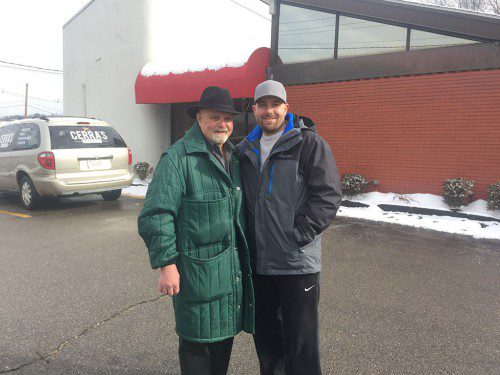 RON CERRA AND HIS SON JOE of Lynnfield Meat & Deli are shown in front of their new store — Cerra’s Market — on Rte. 1 in Saugus. They hope to be ready for opening in early March. (Courtesy Photo)

LYNNFIELD — During the week leading up to Super Bowl Sunday nearly everyone in New England has been rooting for the Patriots. And that includes Joe Cerra, owner of Lynnfield Meat and Deli, and his staff.

Cerra has anticipated a rush of customers on the hunt for delicious food prepared at his current location on Broadway in Lynnfield next to Donovan’s Liquors, since many people will host Super Bowl parties.

But about a month from now, Cerra will be operating in a new location. He and his staff are moving to a 2,900 square foot building he purchased for $750,000. His new location will be on Rte. 1 north next to where Karl’s Sausage Kitchen operated before moving to Peabody.

“We’re here for the long haul, and we’ll still be offering our specialty meats and deli products but not produce,” said Cerra about his business, which will be renamed Cerra’s Market.

Cerra and his family have been in business for a total of 65 years, starting with his grandfather, who started Cerra’s Meat Market in 1952 on Salem Street in Boston’s North End.

Cerra’s father Ron, a meat cutter by trade, will still be actively involved in the day-to-day operations of the business. Like his father and grandfather, Joe Cerra followed in their footsteps by attending Johnson & Wales University and then the French Culinary Institute in New York City. He graduated from the esteemed school in 2004.

Everything on the menu is “homemade delicious,” according to his customers.

One satisfied customer wrote on Cerra’s Facebook page: “Absolutely the best meat around. Always fresh, always delicious and always a friendly, helpful and knowledgeable staff to take care of whatever you need. Prepared foods are outstanding, especially the spinach pie and the stuffed artichokes.”

Top brand deli meats like Dietz & Watson are in the deli case and meats such as sirloin steaks are cut to order.

The trend now is that people who put in long work days don’t want to cook when they get home, said Cerra. So, they often stop in on their way home and order takeout.

“People lead busy lives,” he said. “It’s hard to cook at night after working all day.”