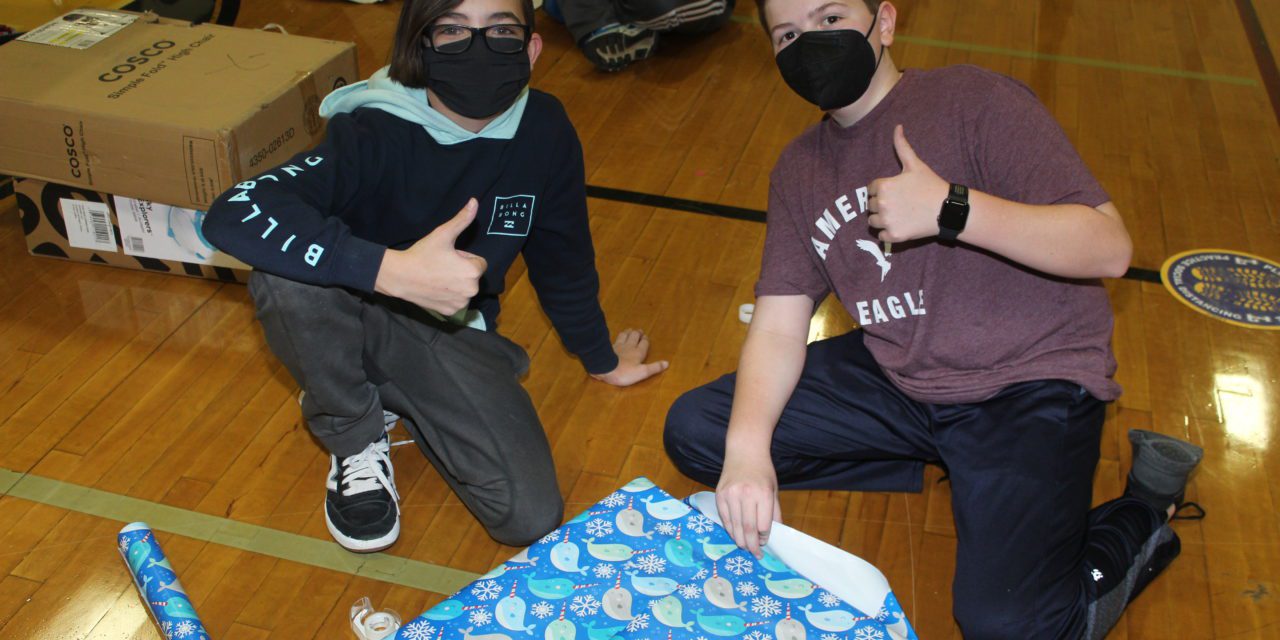 LYNNFIELD — The season of giving is alive and well at Lynnfield Middle School.

The middle school was able to hold an in-person Holiday Gift Drive for the first time in two years on Dec. 22. The middle school’s auditorium, cafeteria and gym were transformed into Santa’s Workshop, as over 300 students along with school staff and parents wrapped over 1,000 gifts for families in need.

LMS was forced to hold a gift card drive last year due to the COVID-19 pandemic.

Similar to previous years, LMS partnered with the Department of Children and Families’ Lynn Area Office once again this year. Due to the number of gifts collected this year, a caravan of cars driven by DCF employees was needed to fill in for Santa Claus and his nine tiny reindeer.

“It’s great to be back,” said fifth grade teacher Patricia Hazelton, who coordinated the Holiday Gift Drive once again. “Every family got everything they asked for and more.”

“It’s great that the Holiday Gift Drive is in full swing again,” said Sallee. “We had a gift card drive last year due to the COVID-19 restrictions. It was great to see our incredibly generous community help families in need during these challenging times. It was great having the students wrap all of the gifts that were donated once again. It was fun and exciting.”

“We had multiple recipients,” said Hazelton. “The social workers provided us with the wish list for each family.”

Hazelton said the LMS community donated a variety of necessities as well as holiday gifts on each family’s list this year. She said the gifts that were donated included bicycles, earbuds, remote control cars and a Minnie Mouse Power Wheels. She also said a desk and a record player were donated to people who requested them. 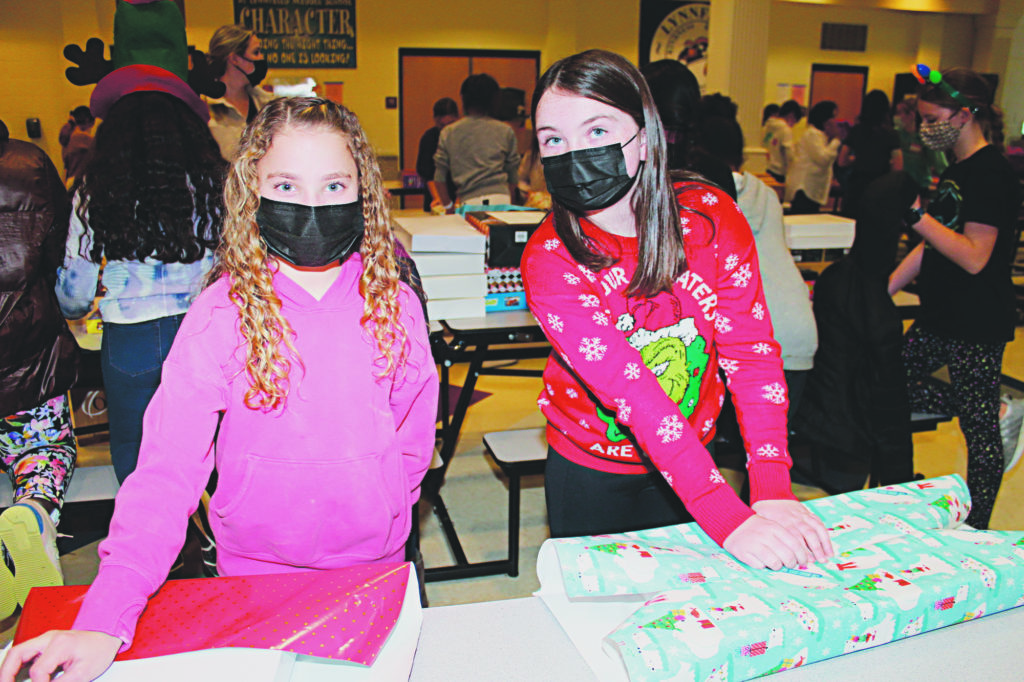 Hazelton said three families donated Boston Celtics tickets to a boy who had them on his list.

“He asked for Celtics tickets, and three families donated them for him,” said Hazelton. “He has never been to a Celtics game, and he can now bring a friend because there are multiple tickets. I am so happy for him.”

Hazelton said the seven families received essential items such as bedding and cleaning supplies as well.

“We had a lot of families ask for cleaning supplies because they are getting their first apartment after being in a shelter,” said Hazelton.

“It’s really nice,” said Wadron-Price. “This is my first year at the middle school, and the school I used to go to didn’t have a gift drive. It feels great helping people in need.”

Hazelton thanked the over 300 students who volunteered to wrap the donated presents during the gift-wrapping extravaganza celebration.

“It was wonderful having over 300 students sign up to wrap gifts,” said Hazelton.

“We were overwhelmed by the outpouring of generosity from the LHS community in supporting this wonderful program,” said Leibowitz and Marcoux in an email. “Thanks to everyone who donated, we were able to give over a dozen gift cards to each family. Operation Kindness looks forward to being part of this event every year.”

“They were absolutely amazing,” said Hazelton.

Hazelton said the community donated $7,000 in gift cards for the Holiday Gift Drive. She said most of the gift cards were for Amazon, Target and Market Basket.

“I endorsed the Market Basket gift cards because it is important to me that families are not stressed when buying food,” said Hazelton. “It’s nice for a kid to have a toy, but it is also nice to have families not have to worry about paying for their next meal. That is important.”

“The community’s generosity is overwhelming,” said Hazelton. “It was crazy. People asked what we needed, and they got what we needed. The students went home and advocated to their parents and guardians that they wanted to help out, and they made it happen. That is what melts my heart.”

DCF social worker Dayna Gordon, who attended the middle school and graduated from LHS in 2010, concurred with Hazelton’s viewpoint.

“The Holiday Gift Drive is wonderful,” said Gordon. “It has been a very hard year for people and it was great seeing the community come together and give back to people in need. It is very much appreciated. I want to thank Patricia Hazelton and the middle school’s staff, students and families for making the Holiday Gift Drive happen.”

“I want to thank Valerie Rondeau and Christine Carpenter, whose children are out of college now, for working incredibly hard to organize the gift cards that were donated,” said Hazelton. “Kristin Thomas printed labels for us, which was a huge help. Jen Goguen got all of our wrapping supplies and made sure we were all set. Middle School Principal Stephen Ralston and Assistant Principal Tom Sallee were very supportive once again.”

Sallee thanked the students, families and staff for working tirelessly to make sure the seven needy families had a special holiday season. He also thanked Hazelton for coordinating the Holiday Gift Drive once again.

“Patricia does an incredible amount of work and makes everything happen,” said Sallee.