LYNNFIELD — The Town Common was transformed into a sea of purple on Sunday, Sept. 22, as 600 residents came out for the first annual A Night of Hope.

A Healthy Lynnfield and the Think of Michael Foundation hosted the inaugural ceremony in order to raise awareness about mental health and substance abuse during National Recovery Month.

The ceremony began when the 600 participants wearing purple T-shirts embarked on a walk from Lynnfield Middle School to the Town Common. After townspeople arrived on the Common, they were given electronic purple candles and a star where they could write a message in honor of someone in recovery or someone who succumbed to addiction.

Town Administrator Rob Dolan served as the master of ceremonies for A Night of Hope. He thanked the 600 attendees for coming to the event. 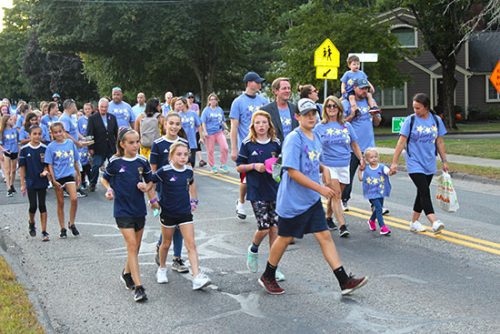 SIX-HUNDRED-RESIDENTS walk down Main Street to the Town Common during the first annual A Night of Hope on Sunday, Sept. 22. A Healthy Lynnfield and the Think of Michael Foundation sponsored the ceremony. (Dan Tomasello Photo)

“This turnout is incredible,” said Dolan.

Dolan also thanked A Healthy Lynnfield and Think of Michael for hosting and planning A Night of Hope. In addition, he thanked numerous athletic teams, civic groups, the Lynnfield Clergy Association and town departments for their assistance in making A Night of Hope possible.

Board of Selectmen Chairman Phil Crawford, who leads A Healthy Lynnfield, said he was thrilled with the turnout for the first annual A Night of Hope.

“You all look fantastic in purple,” said Crawford. “I am completely blown away with the turnout tonight.”

In the wake of the opioid crisis, Crawford said A Healthy Lynnfield was formed in order to raise awareness and educate townspeople about mental health and substance abuse.

“Statistics show that over 90 percent of the people who have an addiction started to drink or use drugs before they were 18-years-old,” said Crawford. “That is why prevention is so important.”

Crawford said A Healthy Lynnfield has developed prevention programs for middle and high school students over the last two years. He also said the nonprofit organization has developed programs and initiatives for adults and families.

Communities across the country have been hosting events similar to A Night of Hope as part of National Recovery Month. Crawford said events such as A Night of Hope “celebrate the millions of Americans who are in recovery, reminding us that treatment is effective and that people can and do recover.”

“It also serves to help reduce the stigma and misconceptions that cloud public understanding of mental health and substance abuse disorders, potentially discouraging others from seeking help,” Crawford continued. “We need to share resources and build networks to support recovery. A Healthy Lynnfield and the Think of Michael Foundation are doing just that.”

Crawford said the 600 residents who came to A Night of Hope recognize Lynnfield has been impacted by mental health and substance abuse.

“It is a testament to this community,” said Crawford. “These issues know no community, economic or educational boundaries. This event is a way to say, ‘Lynnfield is a community that supports those impacted and those on their positive journey of recovery.’”

After Crawford concluded his remarks, he was given a round of applause.

On the morning of Michael’s funeral at Saint Maria Goretti Church in January 2018, Dalton said people waited in line for hours to say goodbye.

“There were plenty of tears, hugs and comforting words that morning,” said Dalton. “One comment in particular resonates with me to this day. A longtime family friend approached me and hugged me. He said, ‘When I heard the news – I said, No not the Daltons. This can’t happen to that family.’ Well, it did happen to the Daltons. We weren’t immune to this epidemic. And most important, I say to all of you, neither are you. Had someone said those words to me before Michael had become a substance abuse user, I would have immediately dismissed the thought. And I would do so because I was confident in my son and in us as a family that we would never fall victim to this disease.”

Dalton said Michael was a “happy child” while growing up in town and had many friends. Sports were a big part of Michael’s life, his father recalled. He noted Michael was a star hockey player for St. Sebastian’s School and Colby College. While Michael also played football and lacrosse at St. Sebastian’s School, Dalton said, “Hockey was his first love.”

“Michael wasn’t the most skilled player, but no one played harder than him,” said Dalton. “That’s why at the end of his freshman year in college, he was voted the sole team captain. He was a true leader on and off the ice.”

Dalton said one of Michael’s favorite sports memories was playing in the “Lynnfield old men’s football game” with friends during Thanksgiving weekend.

“And for all the accolades that Michael earned playing football, he considered being twice named MVP by his childhood friends his favorite,” said Dalton. “Mention of that always brought a smile to his face.”

Dalton also said Michael was “sensitive and compassionate.” He recalled the time when Michael defended a girl who was being bullied on a school bus. While Michael was playing a hockey game against an opposing team that featured his younger brother Jamie, Dalton said Michael jumped the boards and went after his own teammate after the player “attacked an unsuspecting Jamie.”

“Throughout his life, Michael was always there for his family, friends and teammates,” said Dalton. “In his mind, he was everyone’s big brother.”

Dalton said Michael made a positive impact wherever he went whether it was Colby College, St. Sebastian’s School or in his hometown.

“Michael was surrounded by a loving and supportive family,” said Dalton. “Our three children were truly best friends. And he had great friends here in Lynnfield, at St. Sebs and at Colby. He was socially well adjusted. He was intelligent. He was a compassionate human being. He was a natural leader who never backed down from a challenge. And despite all that, he fell victim to this disease.”

Dalton said there are many residents in town who are dealing with addiction.

“I used to think that my wife and I were outliers in that we had a family member who was a substance abuse user,” said Dalton. “Since Michael passed, so many people from our community – perhaps feeling comfortable talking to us knowing that we have lived their nightmare — have told me or members of my family, either in person or in heart-wrenching letters, of their or a family member’s struggles with substance abuse. And I can’t help but think of Michael’s 6-year-old son, Mason, who no longer has the loving father that Michael was.”

Dalton noted that his grandchildren Maddie, Lucas and Ava Cook were at the ceremony along with their respective sports teams. He said Maddie and Lucas are wearing the number 17, which was Michael’s former high school and college number, while suiting up for Lynnfield High’s field hockey and boys’ ice hockey teams. He also said Maddie chose the name Michaela for her confirmation name. He said Ava is wearing the number 78 on her Lynnfield Youth Soccer team in honor of the year Michael was born.

“My message to my three grandchildren and all of the middle school and high school students here this evening is that as you go through life, each and every day you will make decisions,” said Dalton. “Most are trivial in nature and some are life changing. We all try to make good decisions, but occasionally we don’t use our best judgment. And more often than not, we can recover from a bad decision without paying dearly for it. Along the way, Michael made a bad decision, one that he paid for with his life. When you find yourself presented with a choice involving alcohol, drugs or other risky behavior – I urge you to pause and Think of Michael.”

After Dalton concluded his remarks, he was given a round of applause.

“It’s a problem that touches so many lives and it does not discriminate in any way, shape or form,” said Costa. “It gets who it gets. The amount of people it’s affecting is just growing at a rapid rate.”

“Success to me is if one family or one individual can come out of the shadows and not feel the shame and stigma associated with addiction,” said Costa. “This is something that millions of people are dealing with on a daily basis. It’s not rare anymore.”

“I don’t highlight that date for applause, pride or ego,” said Costa. “I do it out of necessity. Drugs and alcohol brought me to my knees. I have embarked on a new journey. I am very lucky and very fortunate.”

While Costa said addiction is a “progressive illness” that is a “beast,” he said overcoming substance abuse is possible.

“While I think prevention is super important, it’s incredibly important that we highlight and focus on the reality that there is hope,” said Costa. “Treatment exists and there are solutions out there. This is something we can combat and treat.”

Costa acknowledged the road to recovery “might not be smooth sailing.”

“It might be a bumpy road,” said Costa. “I know it was for me. But you have to take action to do something about it. For those of us, by the grace of God, who are able to take those suggestions and find a new blueprint for living, the sky is the limit.”

After Costa concluded his remarks, he was given a round of applause.

“I am very happy to be here,” said Costa. “I hope this is the start of something where we are able to come out, talk about this stuff as a town and start to fight this thing.”

Additionally, the 600 attendees lit the electronic candles, engulfing the entire Town Common in a sea of purple.

SIX-HUNDRED-RESIDENTS walk down Main Street to the Town Common during the first annual A Night of Hope on Sunday, Sept. 22. A Healthy Lynnfield and the Think of Michael Foundation sponsored the ceremony. (Dan Tomasello Photo)