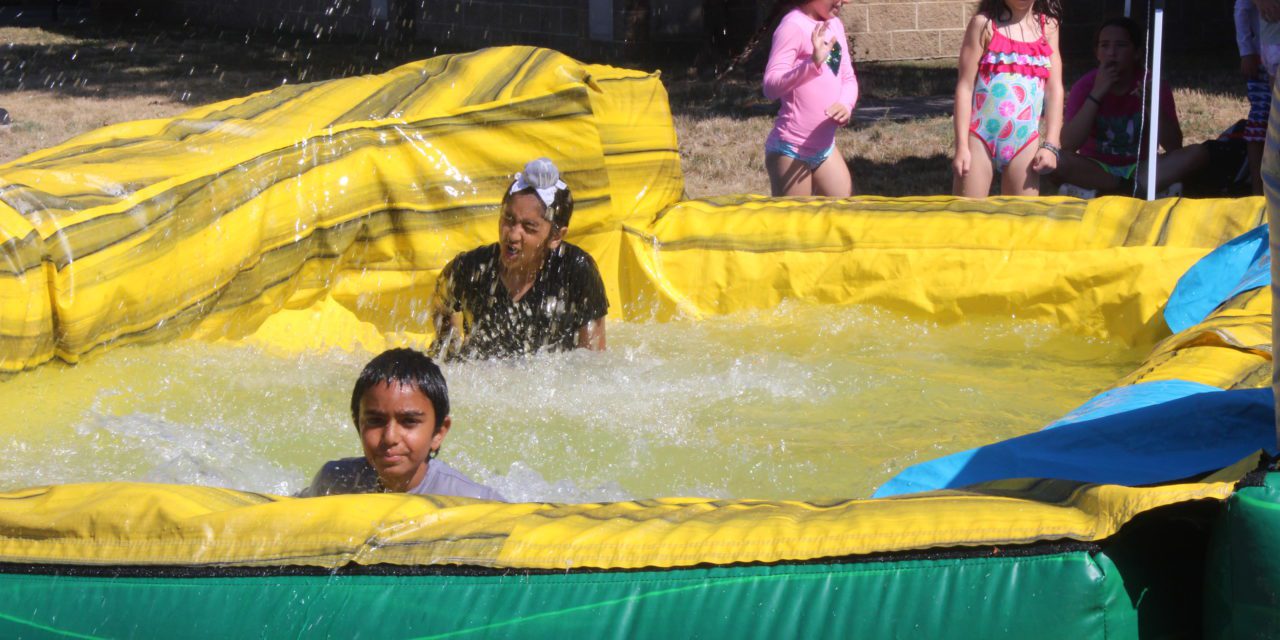 FRIENDS Elias Saiyed (in front) and Ranveer Singh cooled off from temperatures in the 90s by sliding down the inflatable waterslide at Recreation Station earlier this month. (Dan Tomasello Photo)

LYNNFIELD — It was a summer to remember for Lynnfield Recreation.

“I know I say it every year, but we had the best summer with a record number of sign ups this year,” said Mallett.

“We offered programming to the most kids we have ever offered since the program began,” said Sjoberg. “We were incredibly excited about the number of children we had participating in summer programs. It was amazing. We did everything we could for the kids, and we were more than happy to meet the extra demand.”

“The kids were able to participate in many activities such as crafts, four square and gaga ball,” said Mallett.

Recreation Station Director Nikki Louise Ferullo, who has overseen the program for the past 28 years, was thrilled that this summer featured the largest number of children participating.

“It was an outstanding summer,” said Ferullo. “It’s the largest program we have had so far. The kids were involved with a number of games and crafts. Gaga ball was the most popular game. We also introduced pickleball this year. Tenniball, which is similar to baseball but is played on a tennis court and uses a tennis ball instead of a baseball, was also very popular.”

“It’s great that we bought the waterslide,” said Ferullo. “Now that we own it, we can use it whenever we want. If it was a 100-degree day, it was waterslide day.”

In addition to Rec Station, there were 50 incoming kindergartners who participated in Rec Jr.

“Kindergarten teachers mostly run this program,” said Mallett. “It’s a fun place where kids can meet new friends, and maybe even their teacher. When the kids start school, hopefully they will have a friendly face from Rec Jr. joining them.”

Lynnfield Rec also offered Summer Adventure Trips three times per week once again. There were around 55 children who attended each trip.

“Canobie Lake Park is always a fan favorite that always has a waiting list,” said Mallett. “We also went white water rafting, which the kids love. We went back to SkyVenture, which is in Nashua, New Hampshire. The kids were able to try out simulated skydiving and surfing. I got a lot of positive feedback about that trip.”

“It’s a fun recreational league where kids of all levels can play,” said Mallett. “The counselors really get into it with their outfits. I love that girls are playing and rocking it. It’s great to see everyone smiling and laughing.”

Sjoberg noted that 60 children participated in the summer basketball program.

“The numbers kept growing and growing,” said Sjoberg. “Parents and guardians kept signing up their kids after the programs started, which made us incredibly happy. It’s a testament to the quality of the programs Julie developed, and the staff, counselors and volunteers who work incredibly hard every day.”

“I love seeing the kids smiling and laughing,” said Mallett. “It’s great when the parents reach out and tell me their kids are having the best time! I hope the kids had fun and made some new friends.”

“I love watching the kids play,” said Ferullo. “There is nothing better than seeing kids playing outside, running, hanging out and enjoying themselves. I hope the kids were able to relax and have fun this summer.”

“Our goal at Lynnfield Recreation is to provide kids with a fun summer experience with their friends and classmates to keep them connected with each other every day,” said Sjoberg. “We were more than successful this year.”

“The Rec staff is the best of the best,” said Mallett. “The senior staff are amazing, and they go above and beyond every year. Our counselors are so fun, and the kids love them. The kids and staff have a hard time saying goodbye at the end of the summer.”

Ferullo said Recreation Station’s staff and volunteers were “great with the kids.”

“We are fortunate to have a great staff,” said Ferullo.

Sjoberg thanked Mallett and Lynnfield Rec’s staff for working incredibly hard to make sure the town’s children had fun in the sun this summer.

“Julie knocked it out of the park this year,” said Sjoberg. “She puts her heart and soul into everything that she does.

None of the programs would have been possible without our staff and volunteers. The Recreation Commission is incredibly appreciative of the staff, counselors and volunteers’ hard work this summer.”

With summer drawing to a close, Mallett is currently working on Lynnfield Rec’s fall programs.

“We will be having our middle school cross-country program, middle school early release trips and pickleball lessons,” said Mallett.

To sign up for Lynnfield Rec’s fall programs, visit https://lynnfieldma.myrec.com/info/default.aspx.