‘We tip our hat to our first responders’

That was the message hundreds of residents and local officials sent during the fourth annual First Responders Day on Sept. 11. The ceremony, which is a joint town and Lynnfield Rotary Club venture, pays tribute to the town’s first responders and remembers the victims of the Sept. 11, 2001 terrorist attacks.

Rotary Club member Jason Kimball served as the master of ceremonies for the event once again.

“The purpose of this event is to memorialize and remember the tragic events of 9/11,” said Kimball. “In two years, it will be the 20th anniversary of the attacks.”

After attendees held a moment of silence and recited the Pledge of Allegiance, Kimball thanked the Board of Selectmen, Town Administrator Rob Dolan and Assistant Town Administrator Bob Curtin for their assistance in bringing First Responders Day back to town. 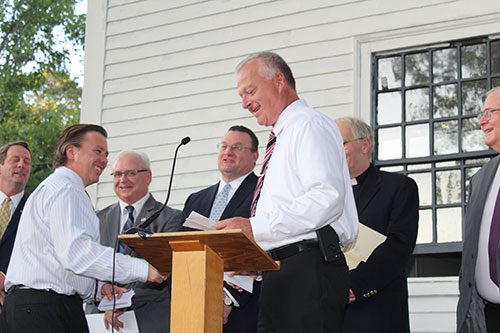 “They took it upon themselves to find money in the budget to hold this great town event,” said Kimball. “This is now on our town calendar the same way Veterans’ Day and Memorial Day are.”

“We pray at this gathering this evening for all who respond at the time of an emergency,” said Rev. Ritt. “We are here to remember, honor and thank all of those men and women, past and present, who serve, protect and guide others to safety.”

Fire Chief Glenn Davis thanked the town and Rotary Club for holding the ceremony once again. He also thanked the hundreds of residents who came out to honor the town’s first responders.

Davis also thanked the Fire Department’s personnel for “their dedication and service.”

“The men and women of the Fire Department are here everyday for the townspeople of Lynnfield,” said Davis. “I have a lot of gratitude for what they do.”

After Davis concluded his remarks, Kimball presented the Fire Chief with a $2,500 check that was given to the Lynnfield Fire Association.

Police Chief David Breen also thanked the town and Rotary Club for hosting the fourth annual event. He thanked the event’s attendees for the support they have given the town’s first responders.

“You are so supportive of the Police and Fire Departments here in Lynnfield,” said Breen. “I appreciate that very much as do all members of the Lynnfield Police Department.”

Breen also thanked Davis for working diligently to develop a positive working relationship with himself and Superintendent Jane Tremblay.

“One of the most important topics we have is school safety,” said Breen. “Chief Davis has been instrumental and a driving force behind that. I appreciate that very much.”

After Breen concluded his remarks, Kimball presented the police chief with a $2,500 check that was given to the Lynnfield Police Association.

Selectmen Chairman Phil Crawford paid tribute to the victims of 9/11 and the town’s first responders on behalf of the board.

“We are gathered here tonight to honor our police officers, firefighters, emergency medical professionals and dispatchers,” said Crawford. “We are also here on this day to make sure we never forget what happened on Sept. 11, 2001.”

Crawford said the 9/11 terrorist attacks “were the deadliest terrorist act in world history and the most devastating foreign attack on the United States since Pearl Harbor.” He recalled that 2,977 people lost their lives during the terrorist attacks.

“Of those killed in the attack were Lynnfield residents Ace Bailey and Sean Lynch,” said Crawford.

Crawford noted that, “While civilians were running for safety from the World Trade Center in New York City, hundreds of first responders were running towards the devastation to save those hurt and trapped in the buildings.”

“Four-hundred-and-fourteen first responders died that day, 343 of which were firefighters and 71 were law enforcement officers,” said Crawford. “In addition, countless others suffered fatal or life-threatening injuries and illnesses related to their service on that day and the days that followed.”

“With charity and compassion, these brave men and women regularly put the well-being of others before their own, often at great personal risk,” said Crawford. “Through their actions, they have become heroes to many and through their example, they are role models to us all.”

“In addition to battling fires, firefighters perform important fire prevention and public education duties,” said Crawford. “If we or one of our loved ones experience a medical emergency, our medical professionals are there at a moment’s notice to provide lifesaving care. Police officers do not simply arrest criminals. They actively prevent crime and make our streets and neighborhoods safer so we can all live and sleep more peacefully. Dispatchers make sure your calls for help get processed and acted on immediately as they know every second counts. Thank you to all of our first responders.”

“On Sept. 11, 2001, we came together as a nation,” said Blodgett. “We witnessed the most horrific act of terrorism on our soil. For a period of time after that, our nation was strong and was one. I wish we could get back to that feeling of nonpartisanship where we work together to try and solve problems. I am so heartened to see you all here today because looking at you, I am looking at what America should be all about.”

“They have worked with us to make sure we get better at what we do to hopefully protect victims of crime,” said Blodgett. “One of the things I feel strongly about is during this national debate about criminal justice reform, we can’t forget about the victims of crime. We can’t let them become invisible and we have to make sure their voices are still heard.”

Blodgett said experts believe people dying from the after effects of the 9/11 terrorist attacks will “soon outpace the number of victims who died in the attacks.” He noted many first responders who responded on 9/11 continue to have health problems as a result of the attacks.

“Seven thousand are currently being treated for a long list of injuries and diseases including several types of cancer,” said Blodgett. “There are 3,700 who report continued treatment for mental health and stress-related symptoms. As we remember this tremendous loss, we can honor the sacrifice that all of you make every time you put on the uniform. We tip our hat to our first responders. Your ability to run towards danger allows the rest of us to live in safety and security.”

“I remind you that you are human,” said Blodgett. “Do not underestimate the stress of the job and what it can do to you. Please take care of yourselves so you can perform to the best of your ability for your sake and the sake of your loved ones. We remember this evening the first responders who perished on the awful day 18 years ago alongside thousands of innocent victims, and recommit ourselves once again to honor and respect the great service of tradition you are part of.”

After Blodgett concluded his remarks, Rev. Ritt gave the benediction and attendees were treated to a free barbecue.

“We have more sponsors than we have ever had before,” said Kimball. “We raised more money this year than ever before because this program is really gaining support and popularity in town. Almost all of the proceeds go to the Police and Fire Departments. We have raised $20,000 since we started this event four years ago.”